Today is not only Remembrance Day but also the 90th anniversary of the end of the First World War. (In Germany, Volkstrauertag falls on 16 November this year.)

And I have to admit that I am one of those soppy people who gets all emotional about the whole poppy-wearing, wreath-laying, old-men-with-medals-parading, two-minutes-silence-observing solemnity of it all. (And, at the same time, a bit irked by the very notion of a 'Veterans Day Sale'. Yes, by all means, honour wartime sacrifice by buying cheap crap...)

This has a lot to do, no doubt, with being raised among people who took their personal military history seriously. After all, the two generations of men who came before me on both the American and British sides of my family went off to war, and taking my uncles into account, their service included the army, navy and air force and extended to theatres from Europe to North Africa to the Middle East to India to the Pacific.

That's a lot of soldiering.

I don't think there's anything particularly unusual about that: the first half of the twentieth century saw both a lot of fighting and mass conscription, and the twenty years between the two world wars were almost ideally calibrated for the children of the veterans of the first to go off to fight in the second. (A chain only broken in my family when, with fortunate timing for my brother, the Vietnam draft ended just in time, in 1973.)

I grew up with hearing those veterans' stories and experiences at family get-togethers and army reunions. It seemed kind of normal to me as a kid that you leave home and go off to some part of the world where you might experience some pretty horrible stuff.

Which strikes me, now, as a fairly odd thing.

Although, these days, of course, it shouldn't. (There was a remarkable article yesterday about an American outpost in Afghanistan, it it well worth reading.)

But, on Remembrance Day, I tend not to think of flags or stirring poetry, but rather of the rather mundane experiences of individual people from my family who were in those two generations. Some of them I knew well, some of them I never met.

I think particularly of my grandfather (and namesake), John Dennis, who was in the Great War. I never met 'Jack', as he died before I was born, but I heard a lot about him.

I don't know much about his military service, but I was always told that he left his quiet Devonshire town as part of an infantry regiment and that he spent some time in Flanders and then some in Mesopotamia, the area now known as Iraq.

This picture, we think, was likely taken in or on the way to the latter. 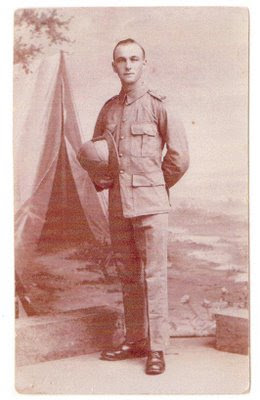 Quite a handsome chap. Certainly, a pith helmet does wonders for any man.

In any case, Jack apparently didn't want to talk much about what he had seen at the front, which was not all that atypical. Returning home to a land that he found hadn't quite managed to make itself fit for heroes to live in, he became a lifelong left-winger. He also, for more prosaic reasons, became a bus conductor. (I have his union lapel pin, which actually says 'Workers of the World Unite'. Very Old Labour.)

He ran for local council in 1947, still looking quite dapper.

He lost the election. The area was, I think, solidly Tory. But according to family legend, he got more votes than anyone would have expected.

In my view, that was victory enough.

This other chap I knew well, if too briefly.


I can see, perhaps, why my mother fell for him. Despite the ears.

The uniform certainly does add something. (For her part, she always insisted that one of his best qualities was that he was a gentleman, unlike some of the other Yanks who were, as she put it, 'all hands'...)

My father, fortunately, never saw combat, though he did experience bombing raids and got more of a glimpse of war's reality when D-Day wounded arrived at the hospital where he worked as a supply corporal. (Unbeknowst to him at the time, his brother--who had followed family tradition and joined the navy--was stationed on a cruiser in the Channel that had been shelling the Normandy coast that day and had narrowly missed being blown apart by a torpedo.)

After the war, he worked at a psychiatric hospital on Long Island, helping soldiers psychologically traumatised by the war, an experience that he never talked about to me, but which my mother said deeply affected him.

Not that long ago, my sisters found a huge number of photographic negatives from my dad's army days. One of them is above.

And this is another.


(The headline of the Scottish 'Daily Express' -- he had been re-stationed to Glasgow sometime after D-Day -- is 'Nuremberg is Blazing. Hitler Wires: Hold Out to the Death'.)

Of all the conversations I wish I could have today, most of them would be with these two guys.

You can't have everything.

I suppose a lot of us wear poppies in remembrance of one of our family, which can happen after a total war. I wear mine for my father, who was in the Pacific theatre. Like you, I wish I could ask him more about it - he always talked about the jokes and silly things rather than the dangers. He was part of a bomb dismantling unit, and according to my sister, thought it would mean that he would live or be blown to pieces rather than be maimed or crippled.

Thanks for the comment, kb. I'm one of those people (kind of rare?) who actively seeks out the poppy vendors if I'm in Britain when they're available. They often seem a bit taken aback that they don't have to convince me.

A friend of mine commented once on my succumbing to the 'poppy terror' (i.e., the social pressure to wear one), but, as you say, I've always felt it was somehow a personal thing rather than a political statement.

Bomb disposal. I shudder simply at the words.

A pretty massive WWII bomb was defused here earlier this year or late last year. This goes on all the time in Germany (and I presume now and then in Britain). I am amazed by the people who do that.

An interesting question: would I rather be alive and maimed or blown to pieces?

None of the above, please.

They call that war fighting generation "The Great Generation". They should really be called "The Silent Generation". My father was of a generation and nationality who thought emotional expression for men unseemly. Nowadays men are encouraged to be expressive, but have mostly been through a lot less to express.

When I meet young guys of 18 plus it seems utterly incredible that they would once have been expected to go and fight in a war. It seems like a different planet.