A life and its times

Well, we're back, after a very good and productive research trip to London. Regular posting will resume shortly, after the blogging engines have been warmed up.

In the meantime, it is worth stopping by Der Spiegel to read an interview with historian Eric Hobsbawm. Born into a Austrian-British family in Egypt in 1917 and raised in Vienna and Berlin, young Eric was an active Communist during his teens and experienced the 'Weimar' period and the Nazi seizure of power before his family fled to Britain. There, he would become a prolific and renowned historian. (Just look at the picture: one of the most perfect images of 'the historian' I could imagine!) 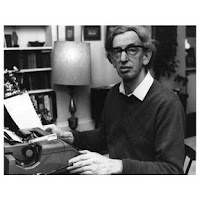 As it turns out, he had a great influence on yours truly at university (though at one a few thousand miles distant from Hobsbawm's beloved Birkbeck). And, unlike E.P. Thompson and Christopher Hill, Hobsbawm is still very much alive and kicking.

The interview is in German (which seems to be the language that it was conducted in: at one point, Hobsbawm refers to his accent -- coloured by a youth spent in both Vienna and Berlin, with the Viennese remaining predominant) so those of you who don't speak it are out of luck. But even for you, the pictures may be of interest, featuring as they do images from 20s and 30s Berlin, along with a couple of the man himself. (One of the interesting facts is that the book department at the Kaufhaus des Westens in Berlin was influential on his intellectual development. How many department stores, one wonders, have generated Marxist intellectuals...)

Just briefly, three sections of the interview stood out, and I present them here in my own, humble translations.

The first refers to something I've written about: the power of contingency in the development of an historical worldview:

The historian, quite deliberately, doesn't write about himself. But it's also important for a historian to know the extent to which he's a child of his time and how he's influenced by it. How different it could have been! For example, had my uncle accepted the position he was offered in France and not taken the one in Berlin, I wouldn't have experienced Berlin in the early 30s up to the [Nazi] takeover, and I would certainly have been a different historian.

And there's a nice bit on how a real witness of history views the presumed invention of hedonism in the 1960s:

Young people's sexuality is another example for the anachronisms that I mentioned. There are, after all, a lot of people who think that they invented sexual freedom in 1968. The historical witnesses know that this sexual freedom was there much earlier, even in the middle-class Viennese circles of my youth or even in those of my grandfather! On the other hand, the sexual freedom that young people have today didn't exist then.

When asked what rules a young historian must follow, Hobsbawm offers the following, sensible, response:

The first rule is that you have to abide by the facts. When something is established, it cannot be denied. You can't lie or keep things hidden. One of the reasons I'm not exactly thrilled about post-modernism is its relativism: the idea that there is no reality. History may not be determined by desirability.

His autobiography, Interesting Times (interestingly enough, renamed Dangerous Times -- Gefährliche Zeiten -- in its German edition) is well worth reading, as are many of his other works, such as The Invention of Tradition, an edited collection.

I've never met him, but I was taught by people who did knew him, which seems a close enough relationship to feel glad that he's still around.

I would like to think that I'll be continuing to be so productive and insightful when I'm 90. Should I, of course, have the good fortune to make it that far.
Posted by JCWood at 5:17 pm No comments:

Away from our desks

We're in London right now, where we'll remain till later in the month, so posting here will be slow. Or maybe even nonexistent. We'll see.

It's not, of course, that there's any shortage of Internet access in London, but spending lots of time in Internet cafes is not really our thing. Besides, there's a whole Real Life out there to be experienced in this city that inspires curiously intense and contradictory feelings of joy and frustration.

The weather has so far been fine, the natives not too hostile and the research is going well.

The prices, however, remain appalling.

Comments on previously written material are, of course, welcome, but it may take a day or so for me to approve them, so please be patient.