A bridge: too far?

My first reaction to these images (via Spiegel Online) of the new, enormously long sea-spanning bridge in China was amazement. 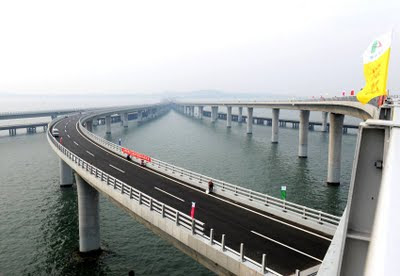 My second was to wonder what J. G. Ballard might have made of it. And part of me is now sad to think that a water-borne sequel to Concrete Island will never be written.
Posted by JCWood at 2:59 pm No comments:

What'll I do without you

This one's for Mike of..wherever...and all ye of little faith.

Was it good for you?

Like our friend Francis, we greet in most pagan fashion the summer solstice (which is being welcomed here in Germany with a rather rainy week, but anyway).

Still, I wanted to greet it with this photo from Der Spiegel, which not only seemed totally appropriate but also reminded me of my mother. 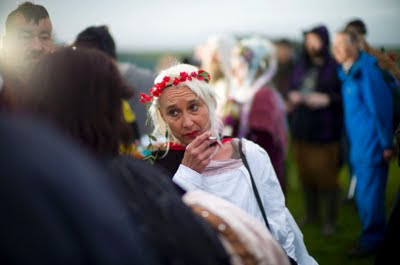 Happy solstice!
Posted by JCWood at 10:05 pm No comments:

Since we are on to Cake: I do like their new album. I especially like this track, which has just the right kind of fuck-you-all-stomp to invigorate the seriously exhausted:

I also like it because it reminds me of my favourite Beatles B-side (the most underrated song ever):

One of my future projects might be to prove that Showroom of Compassion contains a Beatles reference in every track (I really think it does).

But this might have to wait until after I have finished the socks I started knitting around Christmas.
Posted by https://obscenedesserts.blogspot.com/ at 9:36 pm No comments:

Email ThisBlogThis!Share to TwitterShare to FacebookShare to Pinterest
Labels: music, only connect, The Wife

Today marks the tenth anniversary of my relocation to Germany (from Baltimore), which rather astounds me. The intervening decade -- though it's seen its share of joys, sorrows, struggles, defeats and victories -- has flown by in a way that makes me more than a bit uneasy about the decade to come.

I think if I were to meet that rather younger man who disembarked from some plane or other on 21 June 2001, I'd not entirely recognise him as myself. Though I would certainly congratulate him on having taken a step that would lead to his life becoming better, richer and more exciting than he ever could have expected. (This, of course, was not only down to the move itself but also to the main reason for it. You've all met her, I believe.)

Anyway, at the moment, I'm too sunk in preliminary research on a new project (about which you'll be hearing more when I get a chance to surface) to really give this personal milestone the attention it deserves.

But thanks to one of The Wife's recent purchases, this song came on the car stereo this morning, and it seemed somehow appropriate.


Cake, 'Bound Away' from Showroom of Compassion

I am rather irritated by Colin Burrow's review of David Lodge's A Man of Parts, his biographical novel of H.G. Wells, in the new LRB (16 June). It is quite obvious that Burrow likes neither novel nor author, but what bugs me most is the way he uses this vehicle to slip in a few other pet hates - from Rebecca West's odd metaphors to popular neuroscience:

[Wells] was very interested in the mechanics of the human brain. Were he alive today, he would be happy to believe that the mind is the same as the brain, and would present TV programmes in which he wired himself up to a brain-scanner in order to show bits of his cortext lighting up when he thought of Rebecca West.

Flippant, dumb and utterly gratuitous.
Posted by https://obscenedesserts.blogspot.com/ at 3:56 pm No comments:

No, Sarah Palin's emails are not particularly exciting. Well, who would have thought it. Even the Guardian has abandoned its initially hysterical reportage ("Join the fray! Comb the mail! Make the scoop!") and turned to ... I don't know, Glastonbury or whatever. The Syrian man blogger.

The most insightful thing to learn from "The Palin Emails" so far has been her exasperation at the claim that she believed that humans and dinosaurs coexisted at one point in the Earth's history.

Well didn't they - I mean, coexist? Here's a little tune to restore your faith, Sarah (Sorry, I just couldn't help it):

Posted by https://obscenedesserts.blogspot.com/ at 6:40 pm 2 comments:

It's his GCSE history wot did it

That's the only way I can explain why ("student") Darren, 19, from somewhere in Norfolk, turned his parents' shed into an "incredible shrine" to Dad's Army (and installed an Anderson shelter in the garden).

Of course The Traily Shprail loves the chubby-cheeked lad with the unhealthy obsession for a TV show that even forty years ago was fundamentally unfunny.

Don't get me wrong: I love the detail of his display, and that he's collected all those Bisto ads and mint condition ration cards and authentic (though by now congealing) gobstoppers, I honestly do. But don't British kids have anything else to think about but WWII?
Posted by https://obscenedesserts.blogspot.com/ at 1:29 pm No comments:

It is only Pentecost and yet here I am plucking tomatoes and cutting courgettes grown on the balcony (which is one hell of a suntrap: in the garden, we're still on to the strawberries and the currants).

And pumpkins. These will soon be turned into a yummy stew or creamy soup: 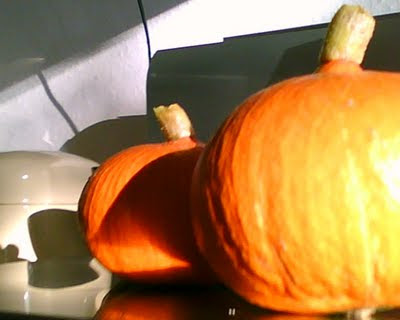 Picture taken around 7am this morning, as the sunlight was flooding into the kitchen. More evidence of the gloriousness of the day: 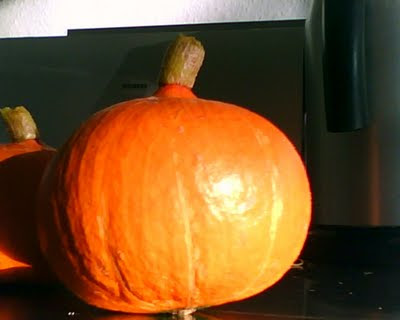 An interesting article at the Guardian on the now fifty-year-old dance known as the Twist led me to something unknown to me until now: the musical monstrosity that conscripted Friedrich Liszt's Liebestraum kicking and screaming into the twisting craze.

More amusing was the way that twisting was analysed with great seriousness, as Time magazine noted in 1962:

If he could hear what has happened to his schöne, weltbekannte melody, Papa Liszt no doubt would be writhing, not twisting. And he would have plenty of company—solid German doctors who warn against "accelerating one's hips and legs in opposite directions," parents and churchmen who deplore "the overt sexual implications of the dance." But some German intellectuals defend the twist. It is, says one Munich psychiatrist, "a proper cure for working off frustrations." And a psychiatrist in Berlin, where the cold war takes the rap for all sorts of aberrations, sees it as a byproduct of an anxious age. ''The twist craze," says he, "can be attributed to Atomangst".

I suspect a twisting revival can't be too far, then, over the German cultural horizon.
Posted by JCWood at 1:14 pm No comments:

The pinnacle of pointlessness

In idle moments, I sometimes contemplate what might be the ultimate symbol of uselessness.

Up to this point, my leading contender was an empty ice-tray in the freezer.

But I think this tops that: a headline from Spiegel Online that reads (my translation) "Catholic Doctors Want to Cure Homosexuals with Homeopathy".

Ladies and gentlemen, we have a new champion in the world of meaninglessness.
Posted by JCWood at 10:55 pm 3 comments: