As the natural-born citizen of a free republic (like at least one other well-known person) who became, by choice, the citizen of another king-free zone, I suppose I should be appalled by today's royalist happenings.

Though, judging by the homepage of one of Germany's leading news magazines today, I suppose this association is less strong than you might think (note the crown in place of the usual 'O'): 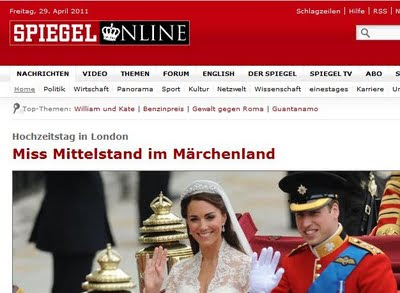 Anyway...nonetheless, as the son of a woman (born in the same year as Lizzie II, as it happens) whose membership in the post-Second-World-War British diaspora was (almost, at least as far as I remember) daily renewed by some reference to the Windsors (and who, by breaking through police barriers during some royal tour in the late 1970s managed to briefly hold hands with HRH The Prince of Plant-talkers), I find it difficult not to feel somehow positively disposed toward today's couple.

And there was a moment during the singing of 'Jerusalem' (which sounded at said woman's funeral four years ago, though in the rather less bombastic Billy Bragg version) during which, I must admit, a tear or two was shed.

That's what a sad case I am.

So I wish them well. As she would have done.

[UPDATE]: Norm put it better than I ever could.
Posted by JCWood at 8:54 pm 2 comments:

Thoughts on a royal wedding

On the occasion of today's nuptials, I thought I'd deck this blog with the appropriate colours: 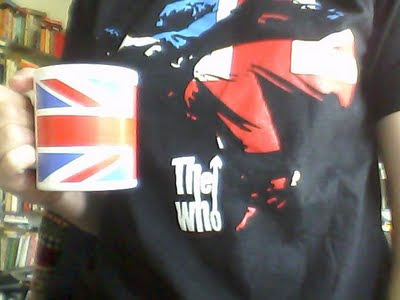 These are the only items with the Union Jack on them in this household, eternalised by my grotty webcam.

I also thought I'd dedicate a song to Wills Lackhair and his betrothed.

Of course, Morrissey was NOT invited to the event.

But here's a quiz question: Could someone out there explain to me why Morrissey claims that "this royal line" still "salutes" Oliver Cromwell. Do they? Why should the royals salute a republican? I don't get this.
Posted by https://obscenedesserts.blogspot.com/ at 10:24 am 1 comment:

'As heavy as children but not so tractable'. A reading recommendation

Thanks to the recommendation some months ago from a friend of mine in London -- a remarkably incisive historian of early twentieth century vice and its policing in London -- I have happily discovered the fiction of Patrick Hamilton.

I had not heard of Hamilton before, which at first made me feel rather a philistine (a feeling to which I'm no stranger), but since the edition of one of his works that I immediately bought has no less an authority than Doris Lessing calling him 'a marvellous novelist who's grossly neglected' I've decided to not feel so bad about it.

I quickly devoured two novels -- Hangover Square and The Slaves of Solitude -- and am now nearly finished with the trilogy that made his name, three novels later gathered under the wonderfully evocative title Twenty Thousand Streets Under the Sky.

I don't really feel up to a full-on review of the novels, but wanted merely to pass on the recommendation to anyone else who might be interested in Hamilton's detailed characterisation and keen observations about London life in the 1930s, more specifically about a social context involving (for the most part) people who are rather down-at-heel without being really 'poor' and who drink rather a lot. (In any literary history of alcohol and drunkenness, Hamilton should have a place of honour.)

The Twenty Thousand Streets... series focuses on three people whose lives are connected through a pub 'in the vicinity of the Euston Road and Warren Street' called 'The Midnight Bell': Bob (the waiter), Ella (the barmaid) and Jenny (a prostitute).

The effect of Hamilton's prose is really, I think, something rather cumulative, and it's hard to summarise or provide a single example to express it.

This is not least because part of Hamilton's skill was to get inside the thoughts of his characters and to highlight their uncertainties about what they were experiencing and their constantly changing views of their situations. Characters are continuously misunderstanding each other (and themselves) and their position; or, alternatively, they diagnose their position very well without feeling that they have a way out of it. (This internal psychological perspective is also what makes the recent BBC version of the Twenty Thousand Streets... series, as good as it is, somehow incomplete.)


He also had a knack for efficient though arch descriptions of the fleeting sensations of everyday life.

And he manages the interesting trick of conveying a certain amount of sympathy and cold-hearted cynicism -- whether serially or simultaneously -- with regard to pretty much all of his characters.

I thought I'd give a few excerpts from the different stories that make up the trilogy -- which are more descriptive than anything -- and just let them stand as is.

In the first, from 'The Midnight Bell', Bob climbs the stairs to Jenny's room in a dingy house in Bolsover Street, not far, geographically, from Regents Park but a world away in terms of class:

On each landing three different doors led into three different rooms containing three different families. All the doors were closed, but the awful belligerence of the poor was to be heard and sensed. On the first floor a man was reviling a woman, and a child, in another room, screaming. It did this not as though it was being beaten (which it probably was)  but as though it was being put to death. On the second floor someone was playing a harmonica, but in the front room an old woman groaned. You could not imagine what at, unless it was the harmonica. On the third floor two other children were being put to death. You could hardly believe that three children were being put to death, simultaneously, in the same house, at the precise time of your arrival, but there you were. (169-70)

From 'The Siege of Pleasure', in which Jenny (later to become a prostitute after a single evening goes terribly wrong) takes up a new position as a domestic servant:

It mattered not to Jenny, who had weighty work on hand -- that is not to say weighty in the figurative sense of the term -- but work which involved hauling out mighty bedsteads so as to get round and make the bed, dragging out monstrous furniture so as to dust behind it, emptying vast Edwardian basins of their brimming soap-grey lakes, lifting enormous and replenished jugs and lowering them at arm's length slowly lest they smashed the massive crockery, transporting wabbling pails, as heavy as children but not so tractable, down stairs and along passages, and carrying piled trays about in a world wherein practically everything was breakable, and only terrific muscular exertion and an agonized striving after balance could avert the impending crash -- in brief, 'woman's work'. (258)

From the opening passages of 'The Plains of Cement':

Though it had no wide reputation, all manner of people frequented 'The Midnight Bell'. This was in its nature, of course, since it is notorious that all manner of people frequent all manner of public houses -- which in this respect resemble railway stations and mad-houses. Nevertheless, a student of the streets, conceiving 'The Midnight Bell' as a nucleus of a London zone less than half a mile in diameter, could not have failed to have been impressed by the stupendous variety of humanity huddled within the region thus isolated by the mind's eye. The respectable, residential precincts of Regent's Park, the barracks and lodging-houses of Albany Street, the grim senility of Munster Square, the commercial fury of the Euston and Tottenham Court Roads, the criminal patches and Belgian penury of Charlotte and Whitfield Streets, that vast palace of pain known as Middlesex Hospital, the motor-salesman's paradise in Great Portland Street, the august solemnity of Portland Place itself -- all these would crowd in upon each other in the microcosm thus discriminated -- a microcosm well-nigh as incongruous and grotesque as any that the searcher might be able to alight upon in the endless plains of cement as his disposal. (344)

(All quotations from Patrick Hamilton, Twenty Thousand Streets Under the Sky [Vintage, 2010]).
Posted by JCWood at 8:18 pm 2 comments:

Music to watch the girls* ... go up the wooden stairs

Little would I have expected to hear to hear the following in Muji's on Tottenham Court Road:

But hear it I did. You can imagine that this did stop me in my tracks for a moment (more concretely: on the staircase that leads up to the upper floor of the shop).

To watch the crime show that goes with the tune, go here.

* refers to this.
Posted by https://obscenedesserts.blogspot.com/ at 7:12 pm 3 comments: