First we take Clarence Bridge, then it's on to Whitehall

George Orwell, commenting on the generally frustrating organisation of things during wartime, with specific reference to the Home Guard, 21 June 1942:

Details of organisation, battle positions etc. have been changed so frequently that hardly anyone knows at any given moment what the current arrangements are supposed to be. To give just one example, for well over a year our company has been trying to dig a system of trenches in Regents Park, in case airborne troops land there. Though dug over and over again these trenches have never once been in a completed state, because when they are half done there is always a change of plan and fresh orders. Ditto with everything. Whatever one undertakes, one starts with the knowledge that presently there will come a sudden change of orders, and then another change, and so on indefinitely. Nothing ever happens except continuous dithering, resulting in progressive disillusionment all round. The best one can hope is that it is much the same on the other side.


That reference to Regent's Park caught my eye. When we stay in London, we tend to go jogging there regularly.

I'll not be able to run through the place any more without wondering where it was that Orwell and his Dad's Army chums were digging their 'system of trenches'.

Which got me wondering: if you were going to launch an airborne attack on London, surely St. James's or Hyde Park would be better tactical options? I mean, if your aim was to take out the government?

While we're at it: anyone know whether there were any genuine Nazi plans to air drop troops into London's parks?
Posted by JCWood at 8:28 pm No comments:

The song of the film of the book

Before my next book is even out, I'm already planning the soundtrack for the film that should be based on it.

It's either a sign of efficient forward thinking or boundless hubris.

I'm not sure myself.
Posted by JCWood at 1:14 pm No comments:

'A photograph of a summer's day, a little boy's lifetime away'

I see that it's Father's Day back in the US (and in other parts of the world, though not here in Germany), and, without wanting to be a downer or anything, it occurred to me that this year will mark 25 years since my own father died.

Can it really be that many years?

Which led me to taking a long look at this photo, taken probably in 1971, of us together in the driveway of one of those various places I still think of as 'home'. 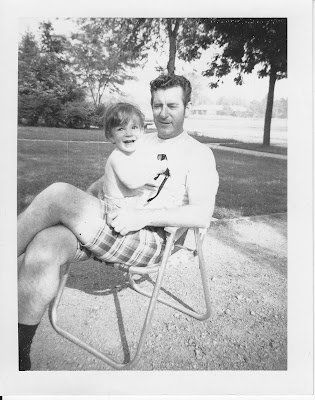 Which led me to this song.

In the garden of your mind

This remix of Mr. Rogers is simultaneously strange, gentle and more than a bit psychedelic.

This was the first time I'd heard of the 'Symphony of Science' series by John D. Boswell. They're all good. I especially like 'The Greatest Show on Earth', not least since it makes Richard Dawkins sound like a member of the Pet Shop Boys.

Posted by JCWood at 9:51 am No comments:

I was pleased today to receive the print version of my latest article on the history of inter-war policing in Britain: 'Press, Politics and the "Police and Public" Debates in Late 1920s Britain', Crime, Histoire & Sociétés / Crime, History and Societies, vol. 16, no. 1 (2012): pp. 75-98.

Since its closely related to the topic of my forthcoming book, The Most Remarkable Woman in England, I go on about it a little at the other blog.

Which you should check out anyway, if you haven't already.

And tell your friends.

There have been a variety of new and interesting things at my blog for my forthcoming book recently, from comments on the state of British justice to excerpts from the prison letters of the woman in question.

Please do go and check it out (and pass on the link to any friends you have who might be interested in such things)...

Posted by JCWood at 6:39 pm No comments:

Cricket and the nation

A couple of somehow related comments that I noted during my last research trip in the 'This England' section of the New Statesman and Nation, in which excerpts were offered from other papers and magazines:

'The conservatism of cricketers is one of the greatest bulwarks against Socialism in this country. I fear that consequently a much-needed change in this direction will be deferred until the claims of dog-racing and other such pastimes have made a serious inroad on the interest in our greatest national sport.'
—From letter on Cricket Reform by Lord Midleton in The Times.

'No-one in England will be peevish at the passing of the Ashes. We have been beaten by a much better team. Oddly enough, and to the permanent bewilderment of foreigners, that is an experience in which Englishmen still find a keen enjoyment.'
—Leader in the Evening News.

Posted by JCWood at 6:32 pm No comments:

Should any republican demonstrations get out of hand today, it seems Her Majesty should be able to handle things. 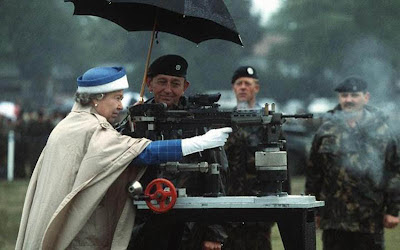 So let's be careful out there, my friends.

(Image via The Shirk Report)
Posted by JCWood at 2:57 pm No comments:

The Mountain Goats, in a video I'd not seen till tonight: