Two peoples separated by a common language. And some other stuff.

I ran across this review of the 1943 Ministry of Information film Welcome to Britain, a guide to American troops on how to make a good impression with the local population (or at least how to avoid making a really bad one).

The New Statesman and Nation had some very good things to say about it:

“The other film on my list, though it can’t yet be seen, is shown to every American soldier landing in England and has the official blessing of the M.O.I. Tells, in a very lively and endearing manner, the best way for Americans to take the English. Pub etiquette, the rations problem, scars of the Blitz, English grouchiness and hopes for future; a brilliant little elucidation of character, with Burgess Meredith interpreting the good and the bad American, and Bob Hope and Beatrice Lillie at their dazzling best. There aren’t so many friendly and helpful films about that we can afford to have this one buried in the files of the American War Office.”*


Not least since my father would have been one of those who were compelled to watch it, I find it an interesting little film, since I try to imagine what he would have made of it.

Corny and stilted at times, it remains pretty watchable. (From about 25:00 there is, for example, an extended section on race relations -- something I noted here recently -- which I hadn't expected.)

Actually, the Britain it depicts is probably as foreign for today's Britons as it ever was for the Yanks of the mid-1940s. Even those from New York City.

But judge for yourselves.

This seems to fit the current Zeitgeist, though it's from 70 years ago.

Plus ça change, as we rootless cosmopolitans say. 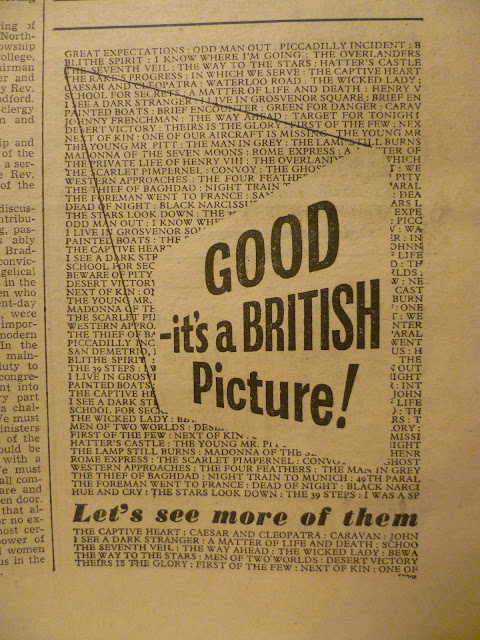 Meet you at the Big Ben Cloverleaf Interchange

A lucky escape there, London, I'd say. 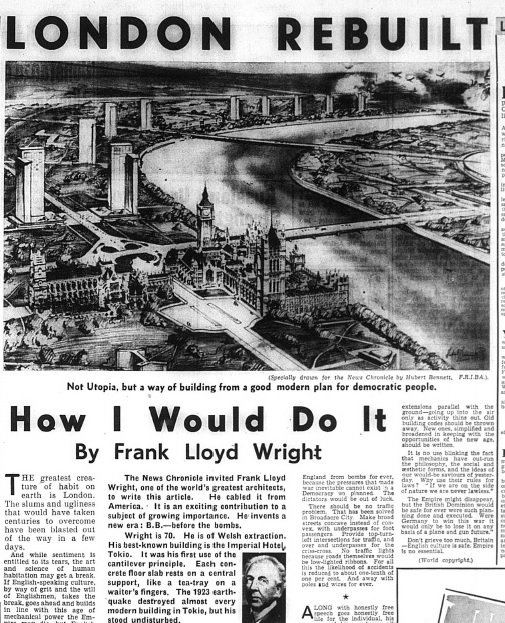 
“‘Mr Hobbes, the Atheist,’ the perpetrator of The Leviathan, like most people who insist on thinking straight, is usually classed as saying the opposite of what he meant.

He wanted peace. He wanted to call his soul his own, and to leave other men to do the same. He understood the conditions which, in this imperfect world, alone make liberty possible. He worked out the technique of defending it against three of its chief enemies, the champions of divine right, the champions of social and political privilege, and the fanatics of conscience.

He had no use for mass-murder or for suicide or for the doctrines which hallow them. He shared with St. Augustine, with Shakespeare (when he was being serious) and with Confucius the notion that there are no good and no bad men, but only men who often want, and sometimes manage, to behave better than they might.

He knew that one child with a stomach-ache in a nursery, one man in a bar with a grievance, one prig in an argument with a scruple, one girl at a picnic without one, can turn a game or a talk into a free fight, a social group into an inferno of suspicion, jealousy and hate. This was why he believed in having someone in the Chair at every social unit’s meeting who could be relied on to nip infernos in the bud.”


"Civilisation and War" (review by Kenneth Bell of Ranyard West, Conscience and Society) in The New Statesman and Society, 31 October 1942, 294. Paragraph breaks added.
Posted by JCWood at 5:39 pm No comments:

When I was young, my mother told me all about how the dance halls in her village instituted "black nights" and "white nights" during the war as a result of intra-American conflicts and fights breaking out when some white soldiers saw black men dancing with local white women.

I was reminded of that when reading this:

"Examples are beginning to reach me of the complications that are almost certain to arise if considerable numbers of coloured troops arrived with the American army. For instance, a British soldier writes to complain that in an English port part of a well-known restaurant is barred to coloured troops. He says that the employees of the restaurant disliked discriminating against coloured soldiers, and that a group of British soldiers near said what they thought about colour prejudice. He adds that his unit was called together and instructed to be ‘polite to coloured troops, answer their queries and drift away.’ They were not to eat or drink with coloured soldiers.

Before going off the deep end about this we must try to understand the nature of the problem that confronts the authorities, British and American. English people will find that coloured troops are particularly easy and pleasant to get on with, and I should think they should be extremely popular in most villages. American troops from a large part of the U.S.A. would agree with this, and be prepared to rub shoulders with the negro soldiers.

But the feeling of white troops from the ‘deep South,’ where the poison of slavery has never left the land, is something far too deep to brush aside. I have met Southerners who seemed rational enough until the negro problem was mentioned, and who would then suddenly show a terrified, lynching spirit which was about the ugliest thing imaginable.

The colour problem in the South is economic, political and sexual. The political side has been increased lately because the parties have begun to canvass for the negro vote. The economic aspect has increased with the increased opportunities of war-time employment. The social and sexual prejudice is so deep that there will be many Southern whites in this country who will take it for granted that it is their duty to interfere if they see black troops with white girls.

What is to be done? The American Government must itself face the problem. It must use every device of persuasion and authority to let white Southern troops know that it is against discipline to treat negro soldiers in the way to which their training and education has accustomed them. I am aware that with a prejudice as deep as that of the South, discipline and re-education will not work nearly quickly enough. I feel it is a mistake to send large numbers of coloured troops.

If things are left to drift an impossible problem will be set to the British authorities, and very unhappy incidents will occur between black and Southern troops, and, only too naturally, between Southern troops and the British, who will instinctively take the side of the blacks against their white assailants."

Special relationships, I: Swinging a line and sweet FA

Spotted in the New Statesman and Nation from many, many summers ago:

"The arrival of Americans makes us feel that something is really happening. I believe that for the most part the two armies are settling down well together, but inevitably there will be some friction. Old soldiers, who recall how the Americans came over last time, fresh when we had had three years of fighting and said they had won the war—they are just the men who are putting things right between the British and American troops. Both British and American have had wise advice given to them to prevent friction.

Difficulties are bound to arise because the Americans have far more money than the British, who are more sore about the allowances given to their wives than about anything else anyway. Also they are warned that Americans are apt to ‘swing a line’ while the British always understate.

An American recruit, naively pleased with his equipment, starts boosting his gas-mask. The English, smiling to themselves, egg him on a bit. The remark they would naturally make about their own mask is quite insincere, but traditional. They would curse the authorities for making them carry the thing at all, and add that anyway it would probably stop sweet Fanny Adams if came to the test."

"I referred last week to the problem of Anglo-American relations in the village pub. My own observations this week have been that things are settling down very well, though the American habit of expecting whisky, which is not to be found because it has almost all been sent to America, has occasioned some ironic comment. It is just as well, in my view, that the whisky is not there, for the last two generations of Americans tend to treat alcohol too little as a social amenity and too much as an occupation."

Now: To the extent that Britons were ever more restrained than Americans when it comes to either self-regard or alcohol -- which may well have once been the case -- this seems like a long lost marker of cultural difference.
Posted by JCWood at 3:56 pm No comments: