Something I ran across in the British Library:

Gangster films get more like war films every day. Scarface (at the Empire) certainly is more like All Quiet on the Western Front than any other film I have seen. The moment the “South Side” introduced machine guns there was nothing for the police to do but to introduce gas-bombs. For the moment Scarface was caught napping and came to a truly terrible end. His successor by now is doubtless provided with heavy air bombers, and it will be interesting to see whether the police will be able to ripost [sic] successfully with supertanks. In fact every American town seems to be conducting, in little, a fine European armaments race. Scarface is certainly one of the most disgusting, and hence one of the most effective, gangsters I have seen. It was, however, criminally immoral to make Scarface himself so unnecessarily charming. I found the guns rather agitating, particularly perhaps as the afternoon was so hot. Scarface is emphatically evening entertainment, and very good entertainment too.


As Rick says to Heinrich: "Well, there are certain sections of New York, Major, that I wouldn't advise you to try to invade."

Email ThisBlogThis!Share to TwitterShare to FacebookShare to Pinterest
Labels: a man's gotta do what a man's gotta do, crime, film, historical bycatch, masculinity, the 1930s

On 'La Dietrich', 'unreal abnegation' and 'too much talky talk'

A film review found while trawling through The New Statesman and Nation:

Shanghai Express, with La Dietrich and Clive Brook, is the last word in Paramount commercial competence. The pure camera work is as slap-up as anything possibly could be. True, the story is foolish; the psychology grotesque; and there is too much talky-talk, and that talk is singularly inept, though uttered in a uniform tone of pregnant emotion.

The Blue Express was far from a first-class picture but succeeded in two minutes in suggesting the reality of a Chinese train, an achievement which eludes Paramount through a good hour of apoplectic effort. You could see nothing for the local colour, as in a bad story by Théophile Gauthier [sic].

But it is merely priggish to take seriously a film that has no purpose save to put La Dietrich through her paces. And you will admire Shanghai Express according to how much you admire Dietrich. "Did you ever see such close-ups?" a couple of sentimental adolescents next to me kept whispering in notes of subdued rapture. And they were quite right. The close-ups were marvellous. Her astonishing bony face was photographed in every conceivable chiaroscuro, registering every variety of complicated pain, and surrendering to every unreal abnegation.

Dietrich is a physical genius, who does well to spend her time on an international train. She has the sleek and sensual efficiency of a really expensive new leather dressing case.


I have to admit that that comparison in the last line caught me a bit by surprise.

Julia, She-Wolf of the Anti-Sex League

While browsing through Boing Boing I was struck by this image, a cover from some Signet edition of 1984, which makes Orwell's classic novel of political totalitarianism look more like a 1970s sexploitation film... 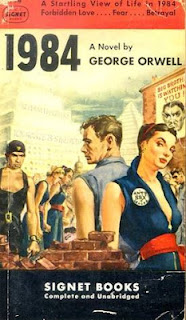 Double-plus extraordinary.
Posted by JCWood at 1:22 pm No comments: