A new video has appeared for the first song released from the new Mountain Goats album, Transcendental Youth.


What the song -- and, I suppose, the video -- is about was explained by John Darnielle at the Mountain Goats website in a post back in July:

This here album track, anyway, is called "Cry for Judas," it is about survival but that's kind of an oversimplification, it's also about building a vehicle from the defeated pieces of the thing you survived and piloting that vehicle through the cosmos, it's kind of complicated but people who know what I'm talking about will kind of intuitively get the idea and the rest of you will I hope be able to get a sense of it through the song.

The Mountain Goats, "Cry for Judas"

(Lyrics and chords)
Posted by JCWood at 8:12 pm No comments:

Sticking with our apocalyptic theme for the evening

While pondering the scientific wonder that is the ability to watch internet video from the International Space Station as it passes over hurricane Sandy, I was struck by the advert that popped up. 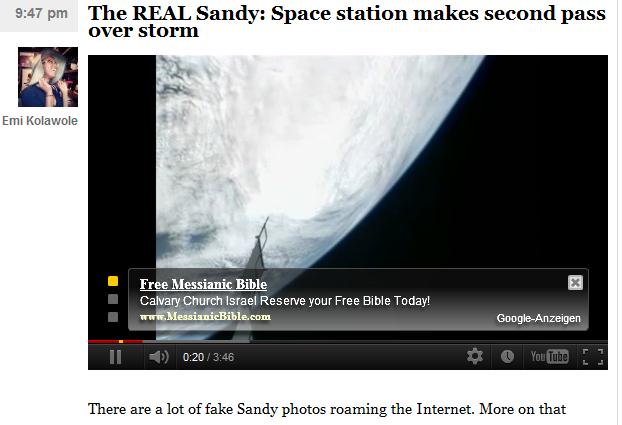 Well, I suppose you find your comfort where you can.

And if you're down their under those clouds, perhaps some handy tips on ark-building might come in handy right about now.

Anyone remember offhand how long a cubit is?

(The space station video, by the way, is quite interesting.)
Posted by JCWood at 10:17 pm No comments:

Mrs Pace and "the found poetry of precise reportage"

There's a very positive review by Tessa Hadley of my new book, The Most Remarkable Woman in England: Poison, Celebrity and the Trials of Beatrice Pace, in today's Guardian.

I'm not only pleased that she liked it but also that her very thoughtful review highlights a few specific things that were in fact very important to me while I was writing the book, such as capturing as far as I could the language of the time (or, rather, as she notes the various languages reflecting the specificities of class, region and profession).

Trying to imagine the past, it's the language we don't get right. Translating experiences out of the idiom of another era into contemporary expression is as fraught with loss as any translation between languages. John Carter Wood's book about the Pace trial works because of his sober and scrupulous assembly of the evidence, quoting the words that were spoken and written at the time so we can feel the textures of the material for ourselves – the found poetry of precise reportage.


She also emphasises the dramatic qualities of the (true) story, which is not only gratifying in itself -- that was, after all, what drove me to write the book in the first place -- but also particularly pleasing because, in the fairly arduous trek to finding a publisher, I heard doubts expressed on that very issue, along with the the opinion that nobody would be interested in the case as they didn't know about it already.

Yes, you hear a lot of odd things when you're trying to publish a book.

In any case, that helps to explain why this passage at the beginning of Hadley's review is such a joy for me to read:

Sometimes life is better than fiction. Is there any novelist who could have got this extraordinary story so perfectly right, inventing it: the violence at the heart of it, the suspense, the succession of revelations, the passions so raw and inchoate that they have a mythic force? And then there's the grand sweep of the narrative, beginning in the bleak poverty of an obscure cottage in the Forest of Dean, acted out finally on the national stage.


I don't expect all the reviews will be this positive (you can't, after all, please everyone), but after investing so much of myself in researching and telling this fascinating story, this is certainly a good start.

Obscene Desserts on the radio

For those of you interested in such things: I will be appearing tomorrow (Wednesday, 17 October) on BBC Radio 4's programme 'Woman's Hour' to talk about my new book, The Most Remarkable Woman in England.

Whether that's something that pleases me or I regret depends, I suppose, on how things go....

The universal truth of punk: "Everybody feels beleaguered at some point"

Here are the Mountain Goats talking about and then covering Jawbreaker's "Boxcar".


"My enemies are all too familiar."

Remembering life in the stone age, circa 1977

Comments from a Wired interview with William Gibson, who reflects on how new music styles (in this case punk) spread in a pre-Internet age.

I suspect — and I don’t think this is nostalgia — but it may have been able to become kind of a richer sauce, initially. It wasn’t able to instantly go from London to Toronto at the speed of light. Somebody had to carry it back to Toronto or wherever, in their backpack and show it, physically show it to another human. Which is what happened. And compared to the way that news of something new spreads today, it was totally stone age. Totally stone age! There’s something remarkable about it that’s probably not going to be that evident to people looking at it in the future. That the 1977 experience was qualitatively different, in a way, than the 2007 experience, say.

Whether it was a 'richer' or otherwise better way of discovering what was new, I can't say.

But it was certainly different.

Still, like Gibson, I'm certainly glad to have discovered Gangnam style, which in 1977 I no doubt would have missed...

Posted by JCWood at 4:52 pm No comments:

Email ThisBlogThis!Share to TwitterShare to FacebookShare to Pinterest
Labels: music, nostalgia, the internet

We heard this on the way to work this morning. And wanted to listen to it all day long.

Michael Kiwanuka, "Tell Me a Tale"
Posted by JCWood at 10:51 pm No comments:

Not least because I'm someone whose new historical project focuses on an aspect of religious history, there were several parts of this interview with historian Quentin Skinner where I found myself nodding.

Art of Theory: Under the influence of your methodology, a number of scholars including some of your former students have sought to put religion back in the picture as a crucial part of the intellectual context in which texts must be understood. You yourself have emphasized the importance of theology in the Foundations of Modern Political Thought. Yet you’ve been criticized in your later work for downplaying the importance of religious considerations. What do you make of these criticisms?

Skinner: Yes, a very interesting point to me because I think I’ve been insensitive to it. One of the most extraordinary things to anyone of my age is the re-sacrilizing of the world. If you were brought up on Weberian—to say nothing of Marxist—social philosophy, then the secularization image of modernity was absolutely central to our self-image. And that has gone into reverse in a way that completely mystifies me.

It’s true that in the Foundations of Modern Political Thought book there’s a great deal of theology and a great deal of discussion of religious principles in relation to political change. There are chapters which are entirely about Lutheran, Calvinist, and Scholastic theology, and I try to tell a story in which they are intimately meshed with politics. I can remember, when I was writing that book that my wife, Sue [James], said she began to worry that I was going to become a convert! So I certainly don’t feel that I underplayed the role of religion in that text, although so important has religion become to people’s sensibilities again in our time that that is something that is widely said about it.

As to my more recent work, I am conscious and even self-conscious about the fact that I do try to focus my historical attention on issues in respect of which my feelings about religion and theology don’t have to obtrude.

I think there are two kinds of interesting atheists. There are those who think like Feuerbach, that religion is the deformation of very deep human feelings and aspirations. Or else, there are those who think that although religion may be false, it may be very useful as a binding force in society, in the way that someone like Hobbes thinks. I just think that, as far as I can see, there is no good reason to espouse any of the tenets of the religious hypothesis in any of the forms that I know of it. For me, it’s nothing but nonsense.