Quite a week. Not only is the BBC showing a documentary on the 'Real Germany' (in which the war is not mentioned, though, of course, only after the ritual show of pointing out that it's not being mentioned) and now someone at the Guardian goes and declares Germany the 'greatest European art nation of the 20th century'.

Gott im Himmel!, as they used to say in my old black and white comics....

There's a very thin line between torture and cosmetics

But we'll be back in action soonish.

But till then, this seems to...well, make sense.

At least as much as anything does these days.
Posted by JCWood at 9:34 pm No comments:

Tales of the unexpected

On a lighter note: I think I can assure you that among the more unlikely headlines I ever expected to read in my life, 'Porpoises rescue Dick Van Dyke' ranks very highly.

In somehow trying to observe both Kristallnacht and Armistice Day, I thought I would draw attention to this intriguing article at the New York Times on a commemoration a few days ago of Jewish soldiers who fought for Germany in the First World War:

The memorial, the first public service at the site for as long as anyone can remember, was organized by the Association of Jewish Soldiers, a small but growing group in the German military whose existence testifies to the feeling by at least some Jews that it is possible for them to be patriots again in the nation that once tried to wipe them out.

Abraham Ben, the son of a concentration camp survivor who has helped organize similar events in Munich, said that he saw no problem with Jews serving in the modern German army.

“Ten years ago I would have given you a different answer,” he said.

But, he said, “Jews in Germany are no longer sitting around with their bags packed. This is home.”

In a different context, I wrote about related matters.

And about other soldiers.
Posted by JCWood at 3:14 pm No comments:

Oh how sweet: In today's Telegraph James Blunt promises to "sing the Taliban into surrender."

Blessed be the meek and don't just just love the smell of humility in the morning?

Still, I don't know whether to pity the Taliban, 'cos this is a palpable threat indeed.

All this reminds me of a song that recently made me think of Blunt:

Posted by https://obscenedesserts.blogspot.com/ at 3:04 pm No comments:

Email ThisBlogThis!Share to TwitterShare to FacebookShare to Pinterest
Labels: music (good and bad), The Wife

Since we were away at a conference last weekend and I was not paying much attention to the internet, I've only made the sad discovery today that one of my colleagues in the History Department, Dr. Mark Pittaway -- a specialist on the political, social and economic history of eastern and central Europe, particularly Hungary -- died last week, aged only 39.

I didn't know Mark as well as I'd have liked, but he was consistently (though humbly) brilliant and always good company. When he drove me back to the train station after another colleague's retirement party last year, we agreed that we really needed to be in touch more often. Sadly, we never really managed it (always, as ever, too much to do....), and I for one am now sorry I'll never have the chance to follow up on that suggestion of his.

Chris has left a fine tribute at Blood & Treasure that captures something essential about what it was like being around Mark:

I remember him laughing as he showed me a pair of peer reviews he'd received for an article: one called it an incisive and nuanced view of labour relations and regime legitimacy in postwar Hungary; the other said that Dr Pittaway was an evil charlatan and an apologist for Stalinist genocide, and thus the article must under no circumstances be published. The editor, safe in the (nearly always) less politicized atmosphere of British historiography, plumped for the former.

As Chris notes, Mark 'made the right enemies for some damn fine reasons, and that's not a bad measure of a man'.

True. And as the tributes here testify, he also made some good friends for some equally fine reasons.
Posted by JCWood at 4:16 pm No comments:

With death and destruction coming through

Heard today on the Autobahn between Bonn and Home:

And heard in my dreams last night:

Pulp 'Do You Remember the First Time'

[UPDATE] Like this one too.
Posted by JCWood at 9:10 pm No comments:

Official: The Guardian, paper of the bleeding obvious

The sociology of the Chinese elite, read through German automobiles at the Wall Street Journal:

According to Yang Jian, managing editor of Automotive News China, a trade magazine based in Shanghai, BMW consumers are “typically young business people — entrepreneurs who have made a lot of money.”

Sounds obvious, until you compare to the brand’s competition: BMW is the No. 2 luxury-car brand in China — it sold 102,916 units in the first 10 months of the year, according to data from market-research firm J.D. Power & Associates. The top brand is Audi, with 172,180 units sold through October. The Audi demographic consists mostly of government officials, the leading consumers of luxury cars in China. The third most-popular brand in China? Mercedes-Benz, which sold 90,306 units from January to October — its models are the preferred choice of older businessmen and government officials in higher positions.

(Via and comment)
Posted by JCWood at 5:42 pm No comments:

Monotony, lassitude and the brutal exposure of skin

Something I just ran across while looking through my files for something else:

Chorus Girls' Clothes
The Monotony of Nudity
From our own correspondent.

Too many undressed chorus girls, Paris has decided, are monotonous.

In a new revue to open this week in one of the largest and most popular Montmartre music-halls well known to British visitors to Paris and noted hitherto for its 'daring' productions, the female form which has offended by becoming too familiar will, it is announced, be veiled from top to toe in muslin drapery and filmy lace.

This reform, according to M. Antoine, a Paris theatrical critic, was inevitable. 'Nudity on the stage', he writes, 'was leading to lassitude and boredom among spectators from its very dreary monotony.' Long clinging costumes, he contends, are more artistic than the brutal exposure of skin. Paris is watching the experiment with deep interest.

It seems though, sadly, that I don't have any articles detailing the result of this particular 'experiment'.

(The 'historical bycatch' series; explanation.)
Posted by JCWood at 11:34 am No comments:

Whatever other problems our Greek friends are having with their economy, it seems -- but this is based only on initial indications -- they're cornering the market on parcel bombs.

(Although there is suddenly some stiff competition on that front, with better technology and a more ambitious distribution strategy.)

I fear we're going to be subjected to reading and hearing more than any reasonable person should possibly need to about the politics of Greek 'anarchism' in the coming days; in particular, (if suspicions are confirmed) this may involve an obscure sect with a bizarre absurdly pompous name that seems to think that trying to blow up politicians and diplomats from not only France and Germany but also Bulgaria, Switzerland, Chile and Mexico is a coherent response to to Greece's economic crisis.

I'll be intrigued (read: exasperated) to hear that explanation.

Somehow, I suspect it'll sound a bit familiar and its authors will somehow resemble those other, more famous urban hipsters of the apocalypse, the RAF. About whom our perceptive friend made some perceptive comments:

Active RAF members fell, as near as I can tell, into two general groups: ruthless monomaniacs or deluded dupes. What united both camps was their second-rateness and insufferable pomposity. Their "manifestos" are dull and turgid; their personalities one-dimensional and unappealing. Once they began their RAF careers -- at the very latest -- most RAF cadres morphed into Godzillas of screechy self-righteous bitterness.

It might turn out rather differently, of course. We'll see. I just hope nobody else gets hurt along the way.
Posted by JCWood at 11:08 pm No comments:

The Bavarian town of Oberstaufen is the among the first location in Germany to feature in Street View. 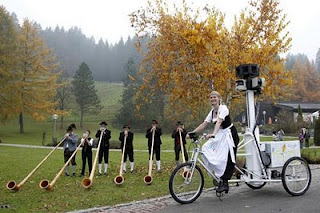 Even if it seems to suffer from periodic blurriness: 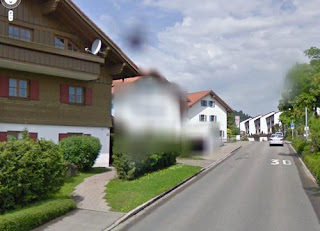 But, rest assured, dear reader: this is only a problem in virtual Germany.

(Pictures source)
Posted by JCWood at 5:57 pm No comments: