Of pansies, potatoes, and middle-aged sublimity

Amidst a much longer rumination on ageing by Frank W. Boreham, a popular early twentieth-century English Baptist preacher, one finds...a garden.

A man’s life is like a garden. There is a limit to the things that it will grow. You cannot pack plants in a garden as you pack sardines in a tin. That is why the farmer thins out the turnips, the orchardist prunes his trees, and the husbandman pinches the grapebuds off the trailing vines.

Life has to be treated similarly. By the time a man enters middle life he realizes that his garden is getting overcrowded. It contains all the flowers that he planted in his sentimental youth and all the vegetables that he set there in his prosaic manhood. It is too much.

There must be a thinning out. And, unless he is extremely careful, he will find that the thinning-out process, will automatically consist of the sacrifice of all the pansies and the retentions of all the potatoes.


It carries on in this vein for some time and then draws some conclusions from George Eliot’s The Mill on the Floss and some thoughts about Habakkuk.

The man of forty rests, therefore, under at least three imperative obligations. He must make up his mind that the arrival of middle-age has not closed against him the door of enterprise; he must resolve that, in the mature years of his life, he will cherish some of the more amiable sentiments that inspired his impressionable youth; and he must regard himself as the natural protector of those who are battling fiercely and bravely with the forces through which, not without scars, he has himself passed.

In spite of everything, middle-age may then be made sublime.

Articles "On Being Fifty" and "On Being Sixty" followed, so Dr. Boreham seems to have been speaking with some experience.

Email ThisBlogThis!Share to TwitterShare to FacebookShare to Pinterest
Labels: historical bycatch, metaphoric gardens, middle-age wasteland, The fucking ageing process, we must take care of our garden

The past: perhaps a not-so-foreign country

Never before, I suppose, has so much music rolled into our lives as now. I have sometimes thought it would be an ideal thing if a river ran past at the foot of everybody’s garden. That is impossible. But now, with the coming of wireless, everybody may regard his home as being built on the banks of music. We ought never to shut out, however, and never forget, the pleasantness of natural sounds.

It is when somebody has had the wireless going too long, and it is at last mercifully shut off, that we rediscover the charm of the little friendly sounds in and about home—a clock, or the lapping of flames in the firegrate, in winter, or the sparrows thinking aloud or the leaves of trees in a light breeze in summer.

Dr. J.H. Jowett, on a boat up the Thames complained of the people who brought gramophones with them. With the gramophone they cut out much pleasanter and, in that setting, more suitable sounds—the water curling along the side of the boat, the rushes in the bank, talking under their breath.

One day this week I was standing in the garden of some friends of mine; such a garden! Lupins of all shades, like scores of pinnacles above a city, roses healthy and regal, fruit trees with heavy branches of growing fruit—all moist, full, and fresh.

But when I was there half the garden’s soul was cancelled out. The son of a neighbour, in his teens, had all windows open and was rehearsing his jazz band. La, la, clip, clop, la-di-da, clapperti-klonk. Whatever it sounded like where everything else was artificial, it was a tin-lid-and-dustbin horror there.

The best music made by human beings is wonderful. I love an orchestra. But I love the sound of rain.

What forces me to be on the Left?

Eric Rohmer on his political allegiances:

I don't know if I am on the Right, but in any case, one thing is certain: I'm not on the Left. Yes, why would I be on the Left? For what reason? What forces me to be on the Left? I'm free, it seems to me! But people aren't. Today, first you have to pronounce your act of faith in the Left, after which everything is permitted. So far as I know, the Left has no monopoly on truth and justice. I too am for peace, freedom, the eradication of poverty, respect for minorities - who isn't? But I don't call that being on the Left. Being on the Left means endorsing the politics of certain people, parties, or regimes that say they're on the Left and don't hesitate to practice, when it serves them, dictatorship, lying, violence, favoritism, oscurantism, terrorism, militarism, bellicism, racism, colonialism, genocide.


Why did I have to think of Labour under Corbyn when coming across this statement in Antoine de Baecque and Noel Herpe's biography of Eric Rohmer (Columbia UP 2014)?

UPDATE: And, as happens quite often, Harald Martenstein's thoughts go in the same direction:

Posted by https://obscenedesserts.blogspot.com/ at 3:01 pm No comments:

Email ThisBlogThis!Share to TwitterShare to FacebookShare to Pinterest
Labels: common sense, fetishisation, film, French film, politics, the Left, the voice of reason, what counts as the Left

Perhaps a glimpse of an under-researched historical phenomenon?

“Too many girls are satisfied with a very small vocabulary, and with vague statements—using ‘sort of’ and ‘kind of’ and many qualifying adjectives which indicate mental slackness and contentment with superficial knowledge,” said Miss K. I Sayers, Headmistress of Lowther College for Girls, Bodelwyddan, at a Speech Day celebration.

“I attribute this chiefly to the lack of good conversation in the home. Bridge parties have taken the place of family conversations.”


Lord knows what she'd have made of the Internet.

Though my anecdotal perception after nearly two weeks in London is that approximately two-thirds of young women's sentences open with the phrase "And I was like...".

I doubt that can be blamed on bridge parties, though.
Posted by JCWood at 4:34 pm No comments:

Spotted in an issue of The Christian World from 1938:

“There was an ugly scene in the House of Commons on Monday when a Conservative member ‘was understood to say’ to a Labour member, ‘Go back to Poland’—and the insulted gentleman very regrettably, but not unnaturally, retorted with a blow. His action was particularly unfortunate in that it may have slightly lessened the resentment felt by the House against the original aggressor. Whether in Parliament or out of it, British public opinion will always express itself, we hope, with peculiar severity in respect of insinuations made against public men on grounds, real or imaginary, of race or religion. This is an un-English practice, and all decent Englishmen should be determined to keep our public life free of it.”

The robbers and the robbed

Spotted in The Christian World in 1937 -- on a page devoted to “What Writers and Thinkers are Saying": a quote from George Orwell's The Road to Wigan Pier:

“Probably we could do with a little less talk about ‘capitalists’ and ‘proletarian,’ and a little more about the robbers and the robbed. But at any rate we must drop that misleading habit of pretending that the only proletarians are manual labourers. It has got to be brought home to the clerk, the engineer, the commercial traveller, the middle-class man who has ‘come down in the world,’ the village grocer, the lower-grade civil servant and all other doubtful cases that they are the proletariat, and that Socialism means a fair deal for them as well as for the navvy and the factory hand. They must not be allowed to think that the battle is between those who pronounce their aitches and those who don’t; for if they think that, they will join in on the side of the aitches.” (Quoted in The Christian World, 1 April 1937, 13)


A curious spot to find Orwell, though it seems as relevant now as then (even if it should be taken to heart as much by those on the side of the missing aitches as on the other one).
Posted by JCWood at 4:30 pm No comments:

A war is won on a nation's stomach

Adverts from the Ministry of Food, 1942. 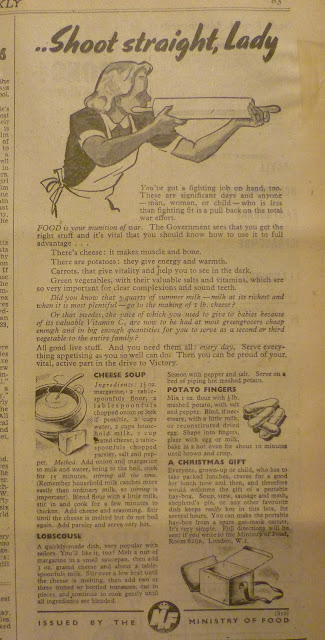 (Another installment in the -- now rather intermittent -- "historical bycatch" series.)
Posted by JCWood at 5:37 pm No comments:

"Multitudes of Americans in England"

Spotted in the pages of the British Weekly (a Christian, Free-Church newspaper) from 1943: a short article by Lynn Harold Hough, an American Methodist minister, written after a visit to wartime Britain.

Just now there are multitudes of Americans in England. One meets American officers and men in the ranks everywhere. You see them on the streets, in the hotels, and in the clubs. And they are receiving a most hearty welcome.

Indeed, there is something winning about the way in which your English friends say to you: ‘What can we do to make your American soldiers feel at home among us? We cannot entertain them in the fashion which would have been possible in pre-war days. But if they will take us as we are, and accept such food as in these times of rationing we can offer, we will be glad to have them in our homes.’ And from the American you are apt to hear: ‘I am receiving so many invitations that I cannot accept them all.’

To be sure there are problems. Our soldiers are paid at a higher rate than the British. And sometimes the glamour of the American soldier—a very attractive person—and of the money he has to spend, causes English girls to show more interest in him than in the British Tommy.

Then there is the colour problem. These American Negroes, with their soft voices and gentle ways, are very interesting to the British, who are eager to serve them in their canteens and to welcome them in their homes. The white soldiers from south of the Mason and Dixon line—and not they alone—are a bit astonished. And sometimes more than that.

One asks rather searching questions about the nature of democracy as one confronts this problem.


Interesting: and not simply because I'm the son of one of those "glamorous" American soldiers.