I am Istanbul, anyone?

Just asking.
Posted by https://obscenedesserts.blogspot.com/ at 5:18 pm No comments:

"The Hopes of Europe Have Descended upon this Island". Yet again.

Several months ago I submitted an abstract for a paper to the "Britain and the World" conference, organised by the British Scholar Society. It's derived from my current book project on a British Christian intellectual group (though it contained a few non-British non-Christians) in the 1930s and 1940s and its reactions to the European crises of the period.

Little did I know that the conference would coincide with the UK's referendum on its membership in the European Union.

Hence I had little idea that the title of my paper -- which I will now give on the day before the referendum -- would sound so...um...fateful: '"The hopes of Europe have descended upon this island": War, Religion, and the National "Mission" in a British Christian Intellectual group, 1937-1949' 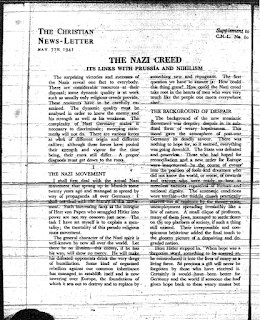 The quote in the bit before the colon comes from an essay in the Christian News-Letter from 1941 by an anonymous author identified as "an able historian with intimate first-hand knowledge of Germany".

I still haven't been able to figure out who he (and it's probably a he) was.

In any case, the essay was titled, "The Nazi Creed" and was mainly about analysing the enemy that Britain was at that time fighting largely alone (though with the support of its empire).

The essay is interesting for a number of reasons, not least for aspects of its analysis of Nazism: "The Hitler movement", it argued, "is suburban, and suburbia is everywhere practically out of touch with the traditions of Europe, including the religious traditions."

Right or wrong -- which is not the point of my talk -- the essay was also the source of my paper's title.

Here is the relevant passage, which consists of the concluding sentences of the essay, in a section titled "The Defence of the European Tradition":

In this war England is certainly fighting for her very existence but she is also fighting for the cause of Europe. She would be still fighting for Europe even if the whole continent should accept the Nazi new order. Success does not affect principles. The hopes of Europe have descended upon this island and there they will stay inseparably bound up with the fate of England.” -- Christian News-Letter #80, 7 May 1941.


What's coming is anyone's bet; though I'd suggest those hopes were better placed in 1941 than 2016.

Posted by JCWood at 7:27 pm No comments: