John and Francis's moving posts about their fathers and grandfathers have inspired this brief Remembrance Day comment of my own. I know, being a Hun my act of remembrance doesn't count for much. But then again ....

Since I don't have any of the few photos here that exist of my grandfather Johann ("Hans") Lamm, a picture that we took a few years ago of the headstone of the grave that he shares with another man at the cemetery in Niederbronn-les-Bains (Alsace) will have to suffice. 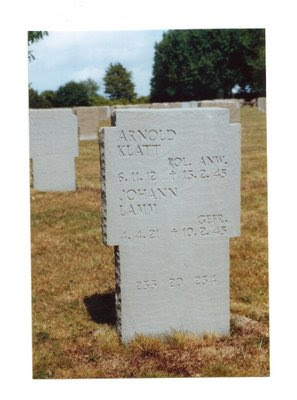 My grandfather was 24 when he died from a bullet wound in the stomach in February 1945, some three months before the end of the war. Not long before that, he had received another injury, but was unfortunately declared fit for service by a GP from his native town of Bamberg (who, needless to say, survived the war and merrily continued to work until well into the 1960s).

He never met the twin daughters who were born about a month later.

He never met me.

But then I guess my life would have been very different if hadn't died. In fact, I'm convinced that if he had survived I wouldn't be here at all. My mother's life would have taken a completely different, maybe happier turn, preventing my parents' fateful encounter and disastrous mixing of genes. Such is the contingency of life.

Still, I like to think that I have inherited some of his traits and talents, as I'm told that he was a very even-tempered and athletic man.

A headstone is by definition a very solid memorial.

This evening I've been watching a BBC TV programme featuring celebrities such as Rolf Harris and Kirsty Walk and their family war stories. Harris traced the movements of his father and uncle who lost their lives in the Great War: two of many Australians to fight and die in a continent far from home. It was a very moving story. Ditto that of Kirsty Walk, who normally irritates me intensely.

Did he have a trade, your Opa Hans?

I've enjoyed (if that's the right word) all three stories. My mother's grandfather died at Ypres before my grandfather was born. This didn't deter my grandfather from volunteering for some exceptionally risky (foolhardy?) roles during WWII, despite having a very young family. [Of course, no-one really knew about that until after he died and it all came out.]

I've always wondered how I'd feel about volunteering in light of that context: he'd grown up fatherless and in real poverty, but had settled down and had civilian work that could have seen him exempted for service. But no, having three kids didn't dissuade him from sticking his hand up for the Parachute Regiment.

Thankfully for me, despite getting shot a few times (!), he managed to survive the war, get back home and conceive my mother.

It’s a shame that many of his generation were ever inclined to talk about it, I’d be interested to hear of the conflict that surely must have played a part in his decision to join up or not. Maybe it wasn’t...

As always, thanks for your comments!

I always thought it was only embarrassed Germans who didn't want to talk about their experiences during the war. That's what it's been like in my family (though I'm sure my parents suffered from this far more than me - they are the angry 68ers accusing their elders, while I already consider them from a certain objectifying distance).

I very much regret not to have pestered my paternal grandmother - who I know was a hysterical Nazi, "Jungmädelführerin" and all that - when she was still alive. I sometimes catch myself scanning photos of screaming German teenagers at Nazi rallies, waving little Swastika flags to see whether I might detect her face in the crowd.

It's a shame I don't know more about my family's past. They are/were living history, and yet to speak about that history has been taboo in my family.

Opa Hans, bless him, was a very simple guy - a labourer, like most members of my family in that generation. I think that for him being a soldier meant getting around a bit (though he probably didn't volunteer), but I have no information - no diaries or letters - about his thoughts or experiences.

I honestly don't think he was a Nazi. The photos that we have show this young, innocent and mildly unsettled-looking guy in uniform whom I feel oddly protective about. I mean: I'm older now than he would ever get. That's such a weird thought.

What a melancholy lot we are! But it gets worse the older I become.