There are many ways of analysing voting patterns this year, but I think the most striking example is a series of maps from the New York Times (under the heading 'voting shifts').

Rather than displaying who won each state, it shows the percentage change from previous elections on a county-by-county basis: the deeper the blue or red, the greater the swing toward, respectively, the Democrats or Republicans. You can compare 2008 to 2004, 2000, 1996 and 1992.

While comparing 2008 to the 1990s elections shows that large sections of the United States are today still voting somewhat more rightward than than was once the case.... 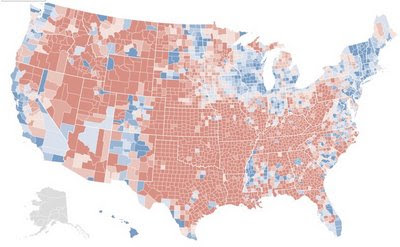 ...comparing 2008 to 2000 and 2004 reveals that most of the country has shifted toward the Democrats (even in places--like the plains--where that shift has not been strong enough to translate into electoral college success). 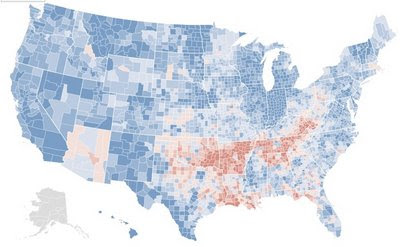 The notable exception to this swing towards the Democrats is clearly confined to the South.

Which has an obvious explanation.

The high density of plumbers in that region.

Email ThisBlogThis!Share to TwitterShare to FacebookShare to Pinterest
Labels: American politics, US elections