A recent spate of articles has been making a surprising – and counterintuitive – suggestion: not only may current ‘hybrid’ cars (such as the Toyota Prius) not be all they’re cracked up to be, efficiency-wise, they are less efficient than most typical SUVs, even the hideous-for-many-reasons Humvee. 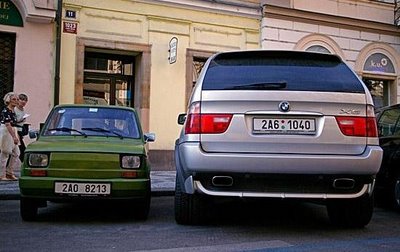 This remarkable conclusion derives from a study by Art Spinella, President of CNW Marketing Research. Spinella and his team applied a very important green principle to examining the environmental impact of different vehicles: their ‘dust-to-dust’ energy costs. This means not only taking their fuel efficiency into consideration but also the energy expended upon things such as R&D, the making of component parts, transportation, repair and maintenance and disposal. Hybrids, since they employ highly advanced composite materials and motor technology, score quite high on the R&D and production energy-usage scale. So, taking everything into account, it would seem that there is no reason for people in general (and Americans in particular) to change their vehicle purchasing habits. As Shikha Dalmia put it in a gloating article at Reason: ‘Now here's a catchy slogan for the next Save the Earth campaign: Have you hugged a Hummer today?’

Terribly droll. But while I enjoy seeing a specious bit of conventional wisdom punctured as much as anyone, there was something about this story which didn’t seem right. Sure enough, a thirty-second search brought up an article from HybridCars.com which provided a few key missing points. As in any vastly detailed, mathematical analysis of efficiency, the original study made some key assumptions crucial to its final conclusions. One of them was that a typical hybrid car would run for 100,000 miles while a typical Hummer would run for three times that amount. This assumption, of course, drastically shrank the overall energy cost per mile driven for the SUV while raising it for the hybrid. (The Reason article did mention this assumption, but gave it far more credibility than it seems to deserve.)

There was another key point given insufficient airing in the articles which reported it. This was the obvious point that, although as cutting edge technological products hybrids have a far higher R&D energy component, the more years they are produced, the more these costs will be amortized, just as they have long been with the old-school, off-the-shelf components of the Hummer.

As the author of the original study himself points out – something ignored, for instance, in the Reason article – the Hummer’s energy advantage will be short lived. As hybrid technology develops, its per-unit energy costs will sharply decline, which, in combination with their superior fuel efficiency, will make them far and away superior to gas-guzzling SUVs, even when analysed in terms of their dust-to-dust energy costs.

As reported at HybridCars.com, Pinella believes

‘It would be totally different in three years. The hybrids will look
significantly better. The new hybrids they are developing now—the new ones that
I've seen, Prius III and Prius IV—are so much more simplified. They'll do what
the current versions do, but with far less complexity, lighter motors, more
recyclable parts, and longer lasting components. The current Prius, for all
intents and purposes, will be the Model T.’

It is troubling enough to see the wilfulness with which a detailed, carefully argued and cautiously laid out scientific study – which in no way ended up hostile to the further development of hybrid technologies – has been spun into something marking the death knell for environmentally-friendlier autos. Some of this is simply incompetent - or dishonest - reporting, much of it aimed at an audience with generally poor skills in scientific and mathematical reasoning.

But beyond all the specious number crunching, it was the self-satisfied tone of many critics of alternative technology and environmentalism which so stood out. From between the lines comes the joyful shout of ‘gotcha!’ as the environmentalists – those naïve elitist dilettantes – get their deserved comeuppance. (See the sarcasm dripping from Dalmia’s quote above.) For some, this whole discussion seems to revolve not around the questions of efficient resource usage or pollution, but rather about tarring environmentalists as yuppie liberals with a smug sense of superiority who deserve to be taken down a peg or two.

The battle over the environment is no longer (if it ever was) one mainly about facts, but instead part of a broader culture war, with environmentalists increasingly being stereotyped (once again, after a period of relative popularity) as naïve, foolish and liberal elitists. Thus, for some time, the anti-environmentalist verbal barrages have been most often fired from the right (where, either for reasons of greed or God, the environment is dismissed) or from the libertarian free-marketeers, who seem to see environmentalism only as a new excuse for big-government to mess with people's freedom.

The political imbalance is, however, not as stark as it seems, either in the past or the present. While vast amounts of environmental damage ensue from profit-driven capitalist enterprises and the consumerist lifestyle which it supports (or which supports it, depending on your view), the environmental record of ‘real-existing’ socialism was grim, whether in its Stalinist or Maoist flavours. (I heard a radio report only yesterday on the improvement in the water quality in the Elbe immediately following the collapse of the GDR. The hitherto largest nuclear disaster in world history will always remain a stain on the environmental record of the left. And China? I don’t even know where to begin…)

Closer to home, the West has always seen no shortage of blue-collar contempt for those who would stand in the way of mining, logging or industrial activities for the sake of water quality or biodiversity. In Europe, where green parties have established their own niche in the local political ecologies, the distinctions are somewhat clearer, as unlike in the US, unions and environmentalists don’t have to necessarily tolerate each other’s presence on the same team. As a result, the strains between red and green tend to come more out into the open. They resulted in some of the most dynamic tensions of Germany’s previous red-green coalition government (which, in many ways, were more fundamental, than many of those being staged in the current conservative and social-democratic one.)

Whereas left and right economic policy tends to be simply about producing more, green thinking at least raises questions about what we produce and how it is produced. And this, of course, points to a difficult – and perhaps insoluble – conflict of interests and raises disturbing questions about our lives as producers and consumers. It suggests that we may have to live differently, and, at least in a material sense, with less.

This is an unpopular message, and probably one of the reasons why the green movement will remain a niche interest. In a system where, even today, we are told that more is better, regardless of what it is or how it is produced, greens are the only ones who – however partially or imperfectly – seem to raise the truly fundamental (and therefore truly radical) questions.

The answers, of course, are a more difficult matter. And it is likely that the most promising ones will not only emerge from a single political tradition. European green parties have traditionally been critics of consumerism and profit-driven exploitation. They have also, however, often put themselves against big-government statism and the centralising tendencies of the left. If this position independent of left and right has allowed the greens to be highly creative, it has also been the source of their most destructive internal centrifugal forces and, furthermore, guarantees a continuous debate about their political identity.

Indeed, green parties tend to have their own shortcomings, such as a generally paranoid attitude toward science and sometimes romantic notions about peace and war. Moreover, although the mainstream versions of most political traditions have shown a criminal disregard for the environment, there have been streams within all of them which have taken a different view. In an important sense, environmentalism doesn't simply 'belong' to the greens.

There is, furthermore, no reason to see environmentalist perspectives as contrary to issues beloved of the right, whether national security or economic vitality. The goal of reducing dependence on oil should warm the hearts of any security-obsessed right winger, just as the economic potential of becoming a leader in green technologies (something which Germany has been doing with some success) should be good for business. (An article from yesterday’s Süddeutsche Zeitung suggests that the US market is already beginning to shift slightly away from SUVs and toward more fuel efficient cars, most of them non-hybrids.)

Which brings us back to the hybrids. Hybrid cars are not going to save the planet (and, indeed, the whole debate around efficiency is a distraction from question of whether we need fewer rather than better cars). However, the argument about them raises a broader issue. The development of new technologies, which in the long term will be essential to improving efficiency in resource use and reducing ecological impacts, will often, at first, involve things which seem inefficient, such as higher R&D costs or a period of subsidisation until they have become developed enough to compete in a market already dominated by longer-established technologies. These costs will be unavoidable in many cases, and accepting them will require a certain amount of political will: on the part of consumers, voters and governments.

But as long as environmentalism is perceived either as a partisan political opinion or as a merely faddish (but nevertheless self-righteous) lifestyle choice, there will be a great tendency for it to become the target of critics who will simply see it as some kind of alien imposition on their version of the good life. In some cases, this perception is real: there are political perspectives which are truly incompatible with green thinking. But in many cases, this is not so. Developing a sensible, sustainable approach to the environment will most likely not be based upon ideas from any single political tradition. Instead the thinking and approaches which will have to emerge will have to be a cross-breed of different principles and compromises among them, an amalgam of perspectives on humanity and social organisation and a mixture of technologies and new models of how to live.

It will be composed of many different elements. It will, in short, be a hybrid.