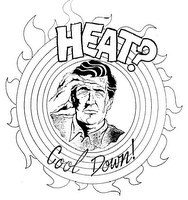 I never thought I would come to hate the sun so much. But as another sunny day in a long row of them marches relentlessly toward its sweltering noontime peak, I think hatred would be an appropriate term. Roll on autumn, I say.

In some ways, I can't complain too loudly, since this summer I'm working from home and can avoid things like crowded, overheated subways and buses or working in offices seemingly designed to serve the double function in summer as saunas.

In the Guardian, Alok Jha takes a detailed look at the perils of the heat. It's amazing to think that in 2003 there were tens of thousands of deaths across the continent as a result of the heatwave in that year. (This is the year in which we - living then in Trier - tried to buy a fan and found every store in the town had sold out. The next spring, we bought one in preparation for another scorching summer...which turned out to be rather cool. Isn't that always the way?) One commentator in Jha's article calls this the worst natural catastrophe on record in Europe (which is doubtful, since the 1755 Lisbon earthquake seems to have been more deadly, but why quibble on details?)

One of the reasons for the high death rate was surprise: many parts of Europe were beset by temperatures which are highly unusual. In 2003, apparently, Britain recorded its first temperature of over 100 degrees fahrenheit, a temperature which I recall being fairly common in the American Midwest where I grew up and the mid-Atlantic coast where I later lived. It seems that all European countries are now better prepared, so lets hope this year is better.

What's struck me, though, is that in thinking about summers in my childhood, very different kinds of memories seem to be called up. Above all, there is the curious recollection of spending at least part of the summer being cold.

The American love of air-conditioning is something that many Europeans find to be odd. Many of the German students I taught in language classes complained about this. In recalling their stays in guest homes in America during a high-school year or other extended stay, they reported having felt uncomfortable all the time, they were convinced that it had made them ill and they were outraged at all that....waste!

They're right. Despite the relative discomfort of recent summers, there are many personal and social reasons why air-conditioning is more a problem than a solution. Air-conditioning in itself is not a curse, of course. There are situations in which climate control is called for, like in hospitals or for the elderly. But Americans, in my experience, overdo it. While living in Baltimore and Washington, where I experienced heat - and more precisely humidity - like I'd never imagined in the Midwest, I used to have to take a sweater to work in the summer. I remember having a nearly constant sore throat and a lot more illness when I worked in air-conditioned buildings.

It seems that this is beginning to revenge itself, as one sees in the now annual crises surrounding the electricity supply. Moreover, there is something perverse in the fact that producing all that cold is contributing to what is making the Earth so hot.

Ah, but for a six-year-old, it all seemed different...

There was that delicious feeling of coming in from from the blistering heat of a suburban Chicago summer to bathe in frigid, machine-cooled air. Mass quantities of ice-cubes would await me there, and the thought of freshly poured 'sun tea' (brewed by the sun in gallon jugs on the front steps) is one of those memories which brings back a host of sensory impressions, from the cold-bittersweet taste, the feel of ice cubes against my lips, the clinking of ice against glass. For a couple of months, the cold air transformed our otherwise modest family homes into oases of refreshment. There was also, of course, the constant, increasingly frustrated reminders of my parents to 'close the door!' lest that precious - and expensive - substance leak out.

I imagine most Germans don't have these kinds of memories of childhood. I suppose, oddly enough, they mainly remember summers as, well, hot. While air-conditioning isn't, of course, unheard of in Europe, it's something I've rarely run across in Germany in private homes. In some supermakets, department stores, yes. But at home? It seems a rarity. (This may be one reason why the German ecological footprint is less than half of that of the American one, though I'm not sure what it's exact contribution to that would be.)

It seems, though, that the heat waves are here to stay. Will this change things?

I hope not. It's in some way tempting to reach for the easy technical solution. But cooling everything everywhere would be unsustainable, and there are, in any case, alternatives. To some extent, coping with climate change will require changes in lifestyle.

As Jha notes in his Guardian piece:

The climate models are unequivocal in their pessimism for the future. But the notion that extreme heat will become a fact of life for Europeans does not necessarily imply an unchecked increase in related deaths. King says northern Europeans can learn a lesson or two from their neighbours to the south. "If you go to a country where people are used to the heat - if you go to Greece, say - the Brits are all out lying in the sun, the Greeks are sitting in the shade. The Greeks will leave their houses with all their shutters closed so the sun doesn't go in through the windows. They will run grapevines on the outside of their houses so the walls are shaded. It's all a matter of adapting to a hotter climate," he says.

We've been doing our best. In fact, I was amazed how effectively a house can be kept cool using this strategy. For a while I had mistakenly kept all the windows in the hope that getting some 'air' in would keep the place cooler. This was, of course, futile. Now, we close up all day long and close the shutters. They are amazingly effective. (You may be thinking I'm an idiot for not knowing this, but where I grew up, shutters - where they were present on houses at all - seemed to be there to be merely decorative.) As a result, our old masonry house keeps itself remarkably cooler than the outside temperature. We only open the windows at night. With a couple of well-placed fans, this works wonders. (I don't know if this would work as well in typically American wood-frame houses...)

And in terms of lifestlyle, there may be nothing all that bad in learning something from our Mediterranean neighbours to the south.

Siesta anyone?
Posted by Unknown at 10:43 am