Steven Heller has a fascinating article about the design and typography sins of the Bush administration. Admittedly, poor font choice could be seen as the least of their crimes and misdemeanors. But still, as Heller puts it:

What’s wrong with a little more attention to detail? Will it make government bigger? Will it eat into the tax cuts for the rich? Will it make the nation soft? Beveled edges and Photoshop drop shadows may be fine for candy bar and football logos, but they don’t give our country the credibility it wants or, for that matter, deserves. In the final analysis, good typography is patriotic.

Alongside aesthetic concerns, there is the question of the messages being transmitted by certain kinds of design. There are many good visual examples on offer alongside the article, but just consider this one: 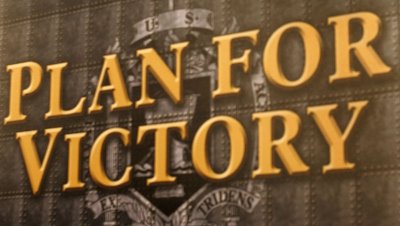 Not only is it ugly, it is - at least in my view - distinctly sinister. (Oceania is at war with Eurasia; Oceania has always been at war with Eurasia....) Furthermore, it does seem strangely ambiguous: is 'plan' meant here as a noun or as an imperative verb? I mean, is the message 'We have a plan for victory', or instead, 'For God's sake, somebody out there please plan for victory, since we have no idea what we're doing!'

Perhaps I have underestimated their sophistication after all: it really is an achievement to be sinister and ambiguous at the same time. Is this a plot to sow confusion among our enemies?

Momus has some thought-provoking comments on Fuller's article. He makes, for instance, the plausible suggestion that the trashy hideousness of White House graphic design is not a question of incompetence, but rather a conscious part of the Bushies' populist communications agenda:

I'd argue that the "good design" Steve is advocating ... will never be adopted by this right wing populist administration because what Steve and I would call good design would be seen by Rove and Bush and Cheney as liberal design. They'll keep giving us "bad" design because it's populist. This regime's distrust of design professionals maps to their distrust of the "liberal media". Just as they see "the liberal media" as biased, infused with the values of sophisticated left- and right-coast urbanites who characteristically vote Democrat, so they see designers as incarnating the same values. Visual bias, we could call it.

This is a good point, but, like so many other aspects of this administration, it raises an interesting conundrum: to what extent are they merely bad at being good and to what extent are they good at being bad. Put another way: is their rule truly as clueless and shambolic as it seems or is their apparent incompetence (whether with regard to hurricanes, budget planning, wars, science policy and the rest) all part of a well-thought-out (if evil) plan?

I've been thinking about this for a long time now and still can't honestly say which I would find worse.

A sinister ambiguity indeed.
Posted by Unknown at 9:40 am