So, we're doomed then?

I've been reading Jared Diamond's latest book, Collapse: How Societies Choose to Fail or Survive, over the last few weeks. It is, admittedly, perhaps not the best selection for bedtime reading, since the overall image it paints of human beings and their abilities (or lack thereof) to live sensibly on this little blue planet is the stuff of nightmares. Diamond traces a series of past societies (Easter Islanders, the Anasazi, the Mayans, the Norse Greenlanders among others) and some modern ones (Rwanda and Burundi, Haiti, the Dominican Republic, China, Australia and the state of Montana) to examine the success - or more often failure - of human societies. Clearly, Diamond's story (as he clearly states) is skewed by his emphasis on collapse. Not every society, as do some of those he discusses, ends up in a deforested, blighted landscape plagued by incessant warfare and occasional cannibalism.

But some do. Moreover, alongside the more extreme, lurid closing chapters which some societies have written for themselves, the parallels which Diamond draws between some of the preliminary mistakes made in the past and those of the present are even more unsettling.

Although he emphases a variety of causal factors (external hostility, collapses in trade, disease, poor political choices), the main villain in Diamond's story could be summarised in one word: unsustainability. The exhaustion of the soil, the destruction of ecosystems and the over-exploitation of natural resources do not necessarily lead to immediate societal collapse. They can instead lead to a gradual, chronic worsening of living standards, increased tensions among and between societies (leading to internal unrest, widespread individual violence or war) and the slow extermination of a large portion of the non-human life on this planet.

By this point, assuming that you are still reading, one of two reactions has probably taken hold: nodding in despairing agreement or an eye-rolling frustration with doom-saying green pessimism. (Diamond is more positive than most environmentalists about the possibilities for change, and his book is by no means entirely pessimistic.) Environmentalists are often accused of 'crying wolf', but critics should reflect on their poor choice of words. At the end of that fable a wolf did in fact appear, and the presumed imaginary threat proved to be real. 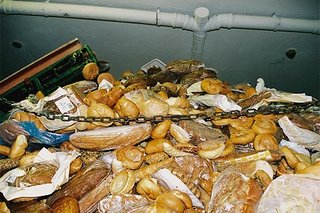 I sensed I could hear that wolf scratching at the door more loudly after viewing Austrian director Erwin Wagenhofer's gripping documentary film We Feed the World, which takes a close look at the way modern food is produced.

A quarter of Vienna’s residual waste consists of unconsumed food, most of which is still perfectly fit to eat. At the same time the number of starving people in the world is increasing steadily: 852 million people suffer from malnutrition, most of them in Africa and Latin America. Even in rich industrialised countries around 10 million people do not get enough to eat.

[...] Analysis carried out by the ÖAMTC Academy in 1997 revealed that even a classic Viennese breakfast with all the ingredients – bread rolls, ham, cheese, milk, sugar, eggs, yoghurt and breakfast drinks – sourced in Austria is the result of at least 5,000 kilometres on the road. If you give yourself the additional treat of a kiwi fruit from New Zealand, you can add a further 1,250 kilometres to that total – and that’s after 20,000 kilometres on a freighter.

[...] The environment also suffers: from the direct impact of pollutants on the one hand and high energy use and its concomitant contribution to climate change on the other. For example, a kilo of strawberries flown in from Israel costs almost five litres of petroleum oil before it reaches the supermarket shelf as compared with a kilo of strawberries from an Austrian farm which uses only 0.2 litres.

Highly industrialised food production leads, certainly, to 'cheap' food. It can only be seen as 'low cost' however, by looking exclusively at its market price. Otherwise, as this film (and the soon-to-appear film of Eric Schlosser's excellent book Fast Food Nation will probably also make clear) it exacts an enormous price in terms of environmental degradation (whether in Europe - see Spain's vast landscape of hideous, water-hogging greenhouses - or in the Brazilian rainforests being converted into soybean fields to feed first-world livestock, or in the over-fished oceans) social inequality (the disappearance of small farms and independent fishermen and their replacement by an unskilled, low-wage agricultural work force; the vast 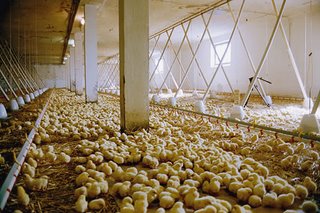 overproduction in American and European farms which make establishing a viable agricultural sector impossible for many developing countries) and cruelty to animals.

We are well accustomed to apocalyptic scenarios in which the world comes to a crashing end. Nightmares of social collapse are certainly well anchored in American culture. (I know several people who made emergency plans at the Millennium and at least one person who has seriously discussed building some kind of protective bunker in his basement.) From post-September 11th reactions to terrorism to the popularity of the Left Behind series, there seem to be no shortage of signs that there are a lot of people who expect the world to go out with a bang. There are also quite a few who confidently expect various things (the market, scientific ingenuity, the American spirit, etc.) to triumph over these problems, giving us the comforting message that all can continue as before.

There is a more likely, I think, though in itself fairly uncomfortable possibility. Rather than the all-encompassing disaster or the bright new future, one can see current trends as pointing to a different kind of apocalypse: one which is already underway, and one, much like the proverbial slow-boiling frog, which we won't notice until it is too late. (When I say 'we' in this case, I mean most people in advanced industrial/post-industrial societies: as Wagenhofer makes clear, there are large numbers of people who are already getting it in the neck, and who have been for some time now.)

The most likely result is a future in which there is a slow, grinding restriction in standards of living for the West (combined with an increasing gap between rich and poor) as well as an increase in social collapse, starvation and resource wars for those living in un-developed countries (and those from wealthier countries who go to fight them).

The good times, for many, won't come to an end, and there'll be cheap greenhouse strawberries (and t-shirts and flat-screen TVs) for the rest of us. There will be enough 'progress' for the market evangelicals to claim that there was nothing to worry about all along, but enough periodic disaster to feed our hunger for the ultimate end-time. In short, rather than a societal collapse as something which might or might not occur at some point in the future, it may rather be something that is occurring before our eyes. (In many ways, I think that the chronic physical and psychological degradation this involves has been well expressed the fiction of J. G. Ballard, but that's a discussion for another time.)

Most likely, the much feared (or much longed-for?) crash will probably not come. Human societies are, in general, fairly resilient things. But it is a resilience which is often bought at the price of savagery.

For human beings, most of whom crave clarity (even if it's disastrous) and who have a very hard time dealing with ambiguity, this may be an unsatisfactory conclusion. Much like the person to cut down the last tree on Easter Island, we don't even know how far gone we already are.