And little gnomes stay in their homes 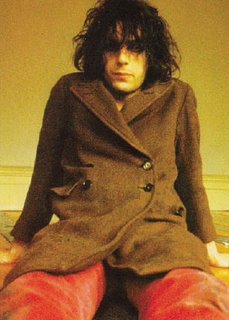 The recent death of Syd Barrett has caused a lot of people to muse about the tragedy of the Pink Floyd co-founder's life. The short version: from the brink of rock stardom to the brink of madness and a long, slow fading out of the public consciousness into cult obscurity in his mum's basement.

There is indeed a lot to mourn in this trajectory. Pink Floyd's first album The Piper at the Gates of Dawn was a music milestone and still sounds amazing today. (Actually, I think it's aged a lot better than Sgt. Pepper, but I appreciate that not everyone might see it that way.) Who knows in what directions Barrett might have led the band if some combination of hallucinogens and an innate inability to deal with sudden stardom hadn't caused the breakdown which led the other members of the band to abandon him. (There does seem to be a certain bitterness that some people have about them doing this...but, really, can you blame them?) His solo albums (especially the first one) were themselves uneven masterpieces. So, yes, Pink Floyd's losing Syd can be seen as a loss for any of us who had an interest in the kind of music they were making.

And this music has been important to me for a long time. It was in junior high (so, about 1982/83) that I discovered Pink Floyd. The first of their records I bought was Dark Side of the Moon (and yes that's record as in vinyl). I liked the later albums too, and I think for a while there, the dark, heavy albums like The Wall and Animals really became my focus. But there was always something about Piper and Saucer full of Secrets (and the Syd-penned singles) which dug into my brain and would not let go. Songs like 'Astronomy Domine', 'See Emily Play', 'Lucifer Sam' and 'Bike'.

I'd forgotten Pink Floyd's music for a while. About a decade, actually. But over the past year and a half or so, I've been rediscovering a few of the interests of my youth. And it's a delight to find that they're not all crap. (Strangely enough, it was listening to the Flaming Lips which re-flipped my psychedelic rock switch. There's a lot of their music which is very clearly Floyd-inspired.)

In terms of rock music, Barrett was indeed a genius able to put together deceptively simple words and melodies to create something memorable. It is a shame he didn't make more of it. But I've been wondering about the emphasis on the 'tragic' nature of his life's story.

From some accounts, from the mid seventies onward he lived a quiet life of painting and gardening, living partly from royalty checks and partly from diability benefits. He dropped the old nickname and reverted to his original name, Roger. He showed a singular reluctance to talk about the old days to the parade of reporters and obsessive fans who wouldn't stop bothering him.

OK, he lived in his mum's basement rather than sticking with what was to become one of the biggest acts in rock history.

But what if Roger was much a much happier guy than Syd? What if a variety of simple pleasures was preferable to worldwide stardom? In his best music, Barrett provided a glimpse of another world, or maybe more accurately, he simply provided a more interesting view of the real world. A mysterious, sometimes dark and sometimes childlike world. It's never seemed to me that that was a world which had very much to do with success and megastardom.

What if his path was not a tragedy, but rather the logical extension of his art? (Which is something far different than saying it's an example to follow...)

I never knew him. And neither did 99% of the people who are commenting on his life. But I thank him, retrospectively, for his music.