Well, as of today, Germany can count itself a few points ahead in the civilisation race.

Wal-Mart has announced that it is officially withdrawing from the German market. After eight years' of losses, it is selling its 85 stores to a German chain, Metro. This follows the recent closure of its South Korean operations, and an increasing tide of criticism in various parts of the world - including crucially within the US - about working conditions and the effect of their stores on the quality of local economies.

These days, in the face of the vastly increasing crapness of modern life, victories, however small, should be vigorously celebrated. Capitalism may have won the Cold War, but the struggle to decide exactly which of its multifarious forms will come to dominate the globe has barely opened.

While this is a battle which might lack the clarity and drama of the old struggles (let's face it, the European social market, as relatively preferable as it is, is hardly the sort of thing to set your socialist soul alight or get you singing the Internationale), its relevance to people's everyday lives should not be understated. Union spokespeople appeared this evening on German news programmes, and they seemed generally (and genuinely) happy at the announcement. It seems that a lot of this is due to the fact that the German chain which will be taking over Wal-Mart's stores is a party to union agreements on wages and conditions, issues which - here as elsewhere - have been a sore point between Wal-Mart and those interested in promoting living wages in the retail sector.

But beyond all the issues of wages, working conditions and workplace romance, Wal-Mart's failure in the German market - as well as its departure from South Korea and its apparent difficulties in some other markets such as Japan - suggests the limits of globalisation à la Americain.

In Germany, as in some of the other markets in which Wal-Mart has failed, one factor may have (strangely enough) been the issue of price itself. For example, with a well-developed market of cut-price retailers, German consumers are already spoiled for choice. Die Discounter (yes, the word has migrated into German so thoroughly that many Germans may believe they invented it) such as Aldi or Plus have long been a presence in German towns. And German consumers are nothing if not skilled at finding the best deal (i.e., they are cheap, cheap, cheap).

But as Sy Schlueter, chief executive of investment house Copernicus in Hamburg argues, there were perhaps other, more culturally significant failures by Wal-Mart. As reported in USA Today:

...Schlueter said consumers rejected some of Wal-Mart's signature features, like stores outside of town centers, employees required to smile and heartily greet customers, or baggers at checkouts.

All three factors are a serious mistake in Germany.

First, and most importantly, Germany still maintains a fairly vigorous culture of high-street/main-street shopping. Sprawl doesn't seem to have hit Germany nearly as hard as many other countries (such as the US and Britain) and Germans don't so far seem to be nearly as keen on the idea of the ex-urban big-box landscape which is more familiar, for instance, in French suburbs. (It is my theory that the French are the most American of Europeans, but please don't tell them this...it will only make them angry.) This is not to say that such things don't exist here in the Federal Republic, but they are comparatively rare and more niche-oriented.

Ikea, for instance, seems an exception, but this is on the one hand because Ikea has at least created a somewhat intriguing version of cool practicality. This evaporates fairly rapidly if you spend more than, say, 10 minutes at one of their stores on a crowded Saturday afternoon, but still, even the most counter-cultural hipster need not feel too embarassed at owning a few pieces of furniture with Scandinavian names. Additionally, Ikea offers a kind of inexpensive cafe eating experience which remains reasonably stylish and - judging by my own experience - seems to appeal to Germans of all ages. Ikea, as thoroughly globalised as it is, remains in some way deeply European. But there is nothing - nothing - remotely cool about Wal-Mart.

Germans are accustomed to shopping in pedestrianised city centres. Take a look at these pictures. Where would you rather shop? 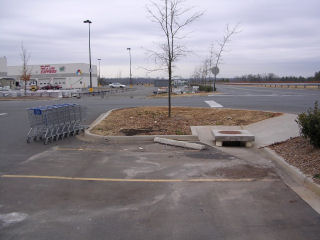 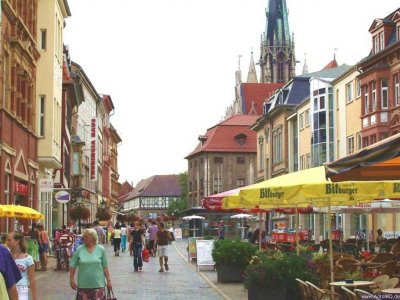 In the US, this point has long become moot. The town where I grew up used to have a main street which was not only picturesque, but which was perfectly practical. You could buy anything you needed there, go to the bank, check out some books at the library, spend some time in a park and just...enjoy the view. I have fond memories of going there as a child. (It was a serious coming-of-age experience when I was finally allowed to ride my bicycle 'into town' where I spent an inordinate amount of time at the book store and library. Hanging out at the local pizza joint was an essential part of teenage life. Are kids today someday going to wax equally nostalgic about Wal-Mart parking lots?)

However, these days, like most traditional main streets - despite extensive efforts by the town government - it's largely a dead zone. With memories of earlier, more pleasant forms of mixed development a fast-receding memory (or, for younger people, not even that) the notion of driving the SUV to an anonymous box somewhere on the edge of town to load up on low-priced crap you don't need becomes a normal, indeed sensible, choice.

German towns are just now beginning to struggle with the sort of thing that began to kill towns in the US as long as twenty years ago. It does seem, though, that they're trying a bit harder to resist, and it doesn't seem as if most Germans are as eager to adopt the big-box solution.

Second, the bit about bagging. This is not a German tradition, as far as I can tell. This was, in fact, one of the difficult experiences I had adjusting to German society. In Germany, you bag your own groceries, and as German cashiers are extremely quick, getting the hang of buying, bagging and paying all at the same time (in a foreign language!) takes some time. There was a period in which I was afraid to go shopping. (This is now long gone. But still, some scars remain.) I think that if Germans see someone bagging their groceries, they - knowledgeable about how much labour costs in Germany - assume that they will be needlessly paying more for a service they don't even want or expect. They'd rather bag their own groceries and feel as if they're getting a good deal.

Third, the similing and greeting. As I've mentioned before, this whole exuberant friedliness thing...is just not German. If you're too over-the-top friendly to a German, they begin to suspect that you want something from them. And that makes them uncomfortable.

Perhaps there are limits to globalisation. Perhaps, under the skin, not everyone in the world is an American at heart. Perhaps this only means buying at a national chain rather than an American one. But at least that might be something. And I, for one, will take a certain pride in living in one of the world's few Wal-Mart-free zones.

A very interesting article.
I think that these Bog Box dead zones are hideous places. Unfortunately here in Glasgow vibrant trading communities have been wiped out to a large proportion. Sure everywhere has it's little high street; butchers, grocers, pound shops ( cheap crap ) travel agents etc etc (though finding a bakery that isn't Greggs is difficult) they have definately been diminished by the onslaught of various hypermarkets.
Architectually there is little substantial about these places. But a hundred yards from here is a place called the Forge Shopping Precint, it looks exactly like the Walmart photo. I wonder if such drastically mimimalist architecture affects people psychologically.

Thanks for the nice comments, Dave. We were in Glasgow, actually, about a year ago. I was actually struck by how vibrant the city seemed. Admittedly, though, we were only in the city centre, and things could look differently outside of there. And, of course, even town centres can be overwhelmed by big chain stores, robbing them of their older commercial biodiversity...the thing, in the end, which makes city life worth living. Not that all chains are necessarily bad, but when alternatives disappear, the result is a kind of denuded nowhere space which is, I think, depressing.

Yes, I think this architecture can affect psychology. I'm not sure whether it's the purely 'minimalist' factors though, since there are forms of minimalist architecture which are quite harmonious and social. What's more the problem is a kind of brutal, auto-oriented concrete moonscape filled with buildings which are just about as unimaginitive and ugly on the inside as on the outside. I think J.G. Ballard has captured this sort of thing - and the alienation and psychosis to which it contributes - very well in his fiction. For example,in Super Cannes or High Rise.