Something intriguing appears from Jennifer Senior at New York Magazine on the subject of happiness. Apart from learning the useless-but-intriguing fact that the smiley face seems to have been invented by a Massachusetts graphic designer in the 60s who failed to trademark it - 'it belongs to the world' as it is put in the article, and that's something which certainly warms the heart - we find out about the rapidly emerging semi-academic field of happiness studies. Unfortunately, it seems that the happiness specialists really can't tell us definitively what makes us happy, or even whether striving for happiness is really a Good and Important Thing.

But there are some intriguing findings

Consider what we could call the geography of happiness (I think we should call it 'joyography'):

Paradoxes abound. Nebraskans think that Californians are happier, but a study done by the Princeton Nobel Prize winner Daniel Kahneman suggests they aren’t. One might expect the homeless of Fresno to be happier than the slum-dwellers of Calcutta, but another study suggests they aren’t (probably because Indians don’t live in social isolation, as our homeless do). In a 2003 poll by the Roper organization, the Danes, the Americans, and the Australians rated themselves the happiest (Australian buoyancy, such an enduring mystery—they’re like an entire nation of people who can’t relate to Chekhov). Other polls have found the Swiss happiest, and the Canadians always do well (hardly a surprise to anyone who knows Canadians). Compared with their purchasing power, Latin and South Americans are much happier than one would imagine, and the Japanese are less so, though being happy in Japan might not be a value per se. And every survey agrees on one point: That the people of Eastern European nations—Lithuania, Estonia, Romania, Latvia, Belarus, and Bulgaria—consistently rank themselves the least happy, with Russia coming in especially low.

The relative happiness of Germans is not mentioned here, unfortunately. Even after five years' living here, I couldn't really say where they'd end up on the international happiness league table. The Germans, I think, have a very complicated relationship with happiness. 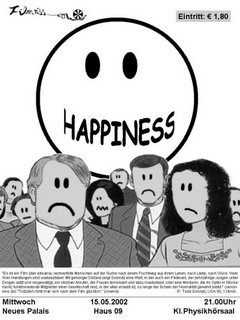 (Germans have a Very Complicated Relationship with many things - patriotism, history, immigration, football - and this is one of the things which makes them so fascinating.)

The complexity, though, might seem curious, as they only have to look as far as their national anthem to find a fairly good formula for happiness. 'Unity and law and freedom are the foundation of happiness', it straightforwardly proclaims, encouraging Germany to 'bloom' in the glow of this happiness.

A somewhat different - and in many ways far simpler - roadmap to Joyville emerges from the - now rarely, if ever, sung - second verse of the original poem written by August Heinrich Hoffmann von Fallersleben in 1841:

One wonders what potential impact a switch to this anthem might have on tourism, but it's unlikely that that experiment will ever be made.

Unity, law, freedom, wine, women and song. Germany should be the happiest place on Earth.

At least on the surface, though, the Germans would appear to be having none of it. In fact, along with being export champions, Germans are well accomplished in another discipline: griping. They are fantastic complainers, and ever since I arrived, I've had the pleasure of witnessing a kind of collective national depression which has lifted only recently, and perhaps only temporarily, during the World Cup. (Note to happiness researchers: you may want to study something called the 'Klinsmann Effekt'.)

Despite living in a society which is highly prosperous and well-ordered, with relatively little crime, corruption, poverty or inequality, most Germans seem to think their nation is in a state of advanced collapse. (One should not, of course, overlook the real problems facing Germany, high structural unemployment being one of them. But, really, for all their problems, they're managing to maintain a civilised and decent society. Try to imagine the United States after a decade of 10 percent or more unemployment...) 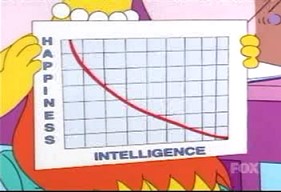 Of course, there is a certain joy in complaining, so all that grumbling may be producing its own kind of serotonin rush. After all, in complaining, we establish the claim that we know what's going on (even if it's going wrong) and therefore establish an image of ourselves as alert and knowledgeable. Such status gains are a surefire ingredient in personal happiness. Furthermore, complaining amidst a group of like-minded gripers also forges a sense of togetherness and community.

Now that I think about it, could it be that this culture of complaint brings us closer to what might be a little known German success story?

Might it be that the route to happiness lay not in avoiding hardship, sadness and darkness, but rather in embracing it?

For instance, one of my favourite German words is Zweckpessimismus, which is a kind of calculated pessimism. It involves predicting, preferably vocally and repeatedly, that the worst case scenario will come true. The Zweckpessimist declares that all plans will come to nothing and that there is no hope.

It is a brilliant and useful tactic.

Before the World Cup, there was a great deal of this about, leading to a consensus that Germany would probably go out in the first round. Everyone was mentally prepared for national sporting embarrassment. The result: unprecedented national euphoria when the team managed to reach third place.

Or consider Schadenfreude, the finding of pleasure in the misfortune of others. I don't think there's any more of this feeling in Germany than in other places, but I do think that the Germans have done us all a great service in creating such a great term for what is a universal feeling. The ability to embrace Schadenfreude is a rewarding adaptation in the happiness stakes. There is, after all, a lot of misery and misfortune around. Why let all this potentially valuable, joy-producing raw material go to waste?

Finally, there is the happiness to be had in avoiding unnecessary social pleasantries. Germans are not unfriendly, although they are fairly restrained among strangers, especially compared, say to Americans, whose hyperactive friendliness and relentless optimism Germans find not only somewhat insincere but also rather exhausting. And it's true: it is really draining to have to be 'up' all the time. Moreover, there's nothing more depressing that having to display a positive mental attitude when you don't feel like it.

It seems, then, that all indications to the contrary, Germany may be a secretly happy place.

My notion that the Germans are on to something receives some expert support in the New York piece itself from a few researchers who argue that the single minded pursuit of happiness may be itself a problem. Julie Norem, author of The Positive Power of Negative Thinking, argues that our potential for happiness (our 'dispositional optimism') may be largely innate, so there's no point in straining to learn happiness (and, I suppose, failure in this effort would bring its own depression). In Stop Smiling, Start Kvetching Barbara Held questions - I think helpfully - the automatic assumption that happiness is in itself a moral virtue.

But I think the finest commentary comes from Adam Philips, who detects something sinister and unproductive in the pressure to be happy:

“It’s something you may or may not acquire, in terms of luck. But I think it’s a cruel demand. It may even be a covert form of sadism. Everyone feels themselves prone to feelings and desires and thoughts that disturb them. And we’re being persuaded that by acts of choice, we can dispense with these thoughts. It’s a version of fundamentalism.”

[...] Phillips declares happiness “the most conformist of moral aims.” “For me,” he continues, “there’s a simple test here. Read a really good book on positive psychology, and read a great European novel. And the difference is evident in one thing—the complexity and subtlety of the moral and emotional life of the characters in the European novel are incomparable. Read a positive-psychology book, and what would a happy person look like? He’d look like a Moonie. He’d be empty of idiosyncrasy and the difficult passions.

“It seems to me that if you were to take a rather stringent line here,” concludes Phillips, “then anyone who could maintain a state of happiness, given the state of the world, is living in a delusion.”

So, nothing is more depressing than the pressure to be happy.

But it goes further than this. As Senior points out, depressives are in fact more likely to be realists and to make accurate assessments about the world around them. Optimists tend to delude themselves about the extent to which, for example, they can control a particular situation.

Given the problems facing the world, whose approach to solving them would you trust more: a nation of depressive realists or one of delusional optimists?

Just as many Germans are, I, too, am pessimistic about the future.

So get out there and spread the good news.
Posted by Unknown at 10:54 am