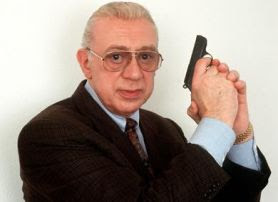 Yes, this is what us Germans associate with the term "sleuth." This is our Karl Malden, solving his cases in the smutty streets of ... upper-middle-class Munich. Despite (or because of?) the series' rather Chabrolian take on the nature and context of crime, the whole world was intrigued by Derrick, the cop show whose title role Tappert played for 24 years until 1998. The show - dubbed and/or subtitled - was exported to 100-odd countries. In Italy, according to Fritz Wepper, the actor who played his sidekick, Tappert was the second most important person after the Pope (video evidence here and here).

We shall miss this unassuming but culturally significant man.
Posted by Unknown at 3:53 pm