And a merry manhunt to you all

Those of you who follow such things -- and we are grateful for those of you who do -- will have noticed that things have been pretty quiet here over the last week or so.

Not a creature has been stirring at this blog, you will have noted, not even a mouse.

It's not been a result of our preoccupation with the seasonal festivities, rest assured.

No, we've both (or each) been stricken by mysterious cold/flu bugs that have dampened our thinking processes and forced us to concentrate all the brainpower we could muster on more urgent real-world projects.

Normal broadcasting, with any luck, should resume shortly.

But The Cold That Wouldn't Go Away hasn't kept me from keeping up with the Playmobil 'Police Manhunt' advent calendar I introduced some weeks ago.

When we last left matters, our young delinquent Otto was scaling down the wall of a house he had just burgled, brazenly flouting the laws of civilised society. As matters stood at the beginning, the police looked to be quite perilously undermanned.

However, you may now be reassured that the intervening days has seen the state's power grow dramatically, and, in a dramatic scene last night, the forces of law and order (with both vehicular and animal support) cornered the miscreant... 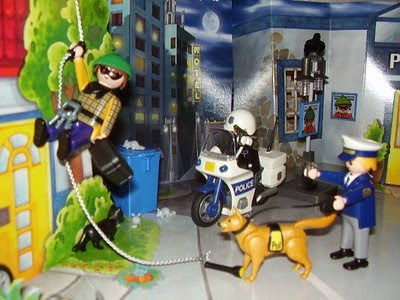 ...(here, the drama is captured in an exciting aerial view)... 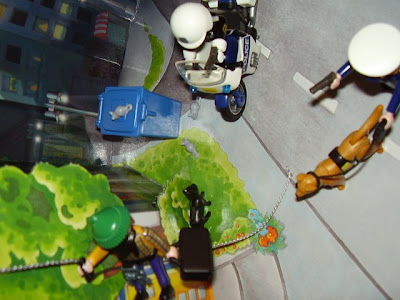 ...and brought him to justice. 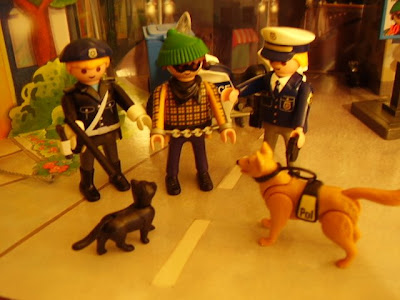 Today, he sits in his cell, reflecting upon his anti-social behaviour. There remains hope that with the right kind of treatment, he may one day be rehabilitated. (Yes, this is Germany, where he's not so likely to simply rot in prison.) 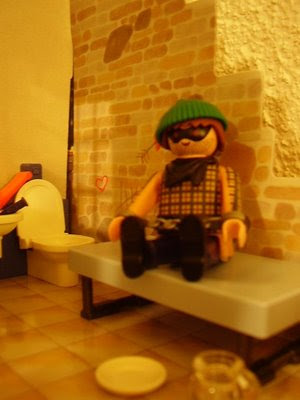 In this regard, young Otto is in a better position than another social deviant, known for his many years of serial break-ins. Fortunately, we receive word that he too, has been rendered harmless by the ever-vigilant guardians of the social order.

Lock the bastard up and throw away the key, I say. (Image via)

And merry Christmas to all, and to all a good night.
Posted by Unknown at 5:05 pm

Bitchin’ interpellation, man! The prison cell looks downright homey. Reminds me of a New Yorker cartoon in which a guard announces to a prisoner: “Alright Jenkins, it’s 11:00. Time for your coddling.”

Mërry Chrïstmäß to both of you, and get well soon.