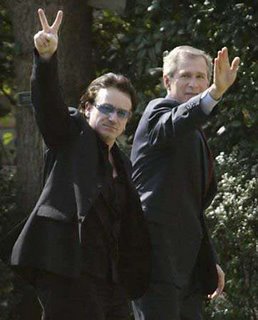 If there's anything The Wife hates, it's what she calls Gewissenspop, i.e., overwrought, pseudo-political pop music With a Message.

In her view, a good pop song has no more than three chords, a clever hook, an unexpected bridge, lots of cow-bell and plenty of 'luuuuurve' in it. It follows that Paul McCartney's poseur-experimentation with Revox audio recorders in 1966 (during the recording of the band's classic Revolver - as reported in this month's Musikexpress) was the beginning of the end of the Beatles. (I mean, they still had a few good years in them, but the great heights of 'Please, Please Me' were never again reached. This does, incidentally, take a lot of the hostility off of Yoko Ono: it was all Macca's fault in the end.)

Anyway, at the top of her to-be-hitlist - immediately followed by the likes of Sting, Herbert Grönemeyer and Xavier Naidoo - is the ubiquitous (at least at high-flying international political and business gatherings) Paul Hewson, better known to you as Bono. Happily enough, John Harris at The Guardian has gone to the trouble of putting finger to keyboard to voice the thoughts she has long harboured but not dared to utter.

Thanks, John, for your wit, courage and discerning taste.