When the hit points finally run out

I was saddened to read of the death of E. Gary Gygax (I originally heard via Boing Boing).

If you've never used the phrase 'chaotic neutral' or coveted a 'vorpal sword' and would have no idea what '1d20' refers to, then that announcement probably doesn't mean much to you.

But for nearly a decade or so, starting in about 5th grade, I believe, some of Mr. Gygax's gaming creations--particularly Dungeons & Dragons (which he co-created with Dave Arneson)--were an important part of my life.

I've been thinking about that time a bit more in the last several months, perhaps because years in which a high-school reunion with a nice, round number comes up are good opportunities for backward-looking reminiscence.

Not for nostalgia, certainly, since a great deal of adolescence was so unbearably horrible.

But most of what wasn't nightmarish was down to my friends from those years, and one of the main things that tied us together--along with Monty Python, Dr. Who, the works of Douglas Adams, the local video arcades and sixties music--was D&D.

I wasn't much of a joiner in high school, but the one membership I maintained through the whole wretched experience was in something called 'Conflicts and Simulations'. They wouldn't, as I recall, let us call it 'The Wargaming Club' as that was too 'violent'. (I could be wrong, but I believe that there was an army recruiter who would make periodic appearances on campus. Real war, though, is apparently not 'violent'.)

Once a week (Thursdays? I don't recall now) there we'd be after school, playing D&D or any one of a wide variety of other strategy or role-playing games. Traveller and Diplomacy were among the other favourites, as well as an RPG we had created ourselves--with a rather shifting set of rules as I remember--that we simply referred to as 'Insanity in a Box'. On many weekends, the dungeon crawling and board-game warfare continued into the wee hours in the dining rooms and basements of friends' houses.

Every couple of years, our high-school yearbook would send someone by to snap a few photos of us freaks at play. Here's me, only a few years before the end of the Cold War, contemplating my next move in...something. (I'm the one in the middle, with a very fashionable haircut and a jacket that is oddly reminiscent of something from the GDR.) 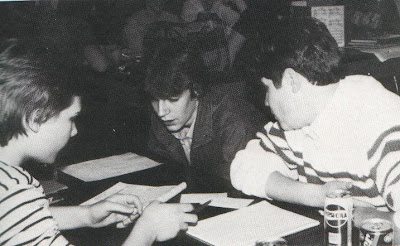 It may seem strange to you--or even pathetic--that some of my fondest memories of that era are times when I was imagining being somewhere else and, more importantly, someone else. For me, though, that's the main association I've always had with the phrase 'teenager'.

If you had a better time of it, well then good for you.

But there were certainly some fine times had and strong friendships made around tables strewn with papers, dice, lead figurines and enormous quantities of caffeinated drinks.

Thinking of those times inspired me to dig out my copy of Neal Stephenson's first (and partly disowned) novel, The Big U. The description at Wikipedia is pretty adequate if you've never heard of it before:

The story follows the misadventures of a socially inept physics student, a pair of gun-wielding lesbians, a hardcore LARP/war gaming club, and other misfits through a series of escalating events that culminates with a full scale civil war raging on the campus of American Megaversity.

I loved the book when I bought it when it came out in 1984, although leafing through it again I realise my fourteen-year-old brain must not have understood a lot of what was going on in the book (especially regarding those gun-toting lesbians). (It has also reminded me to be angry at one my friends who borrowed the book and returned it to me with his handwritten comments all over the place. He was like that though.)

Nonetheless, it was probably the tone and the atmosphere of that geeked-out milieu that probably appealed to me. And the humour. And the violence.

Here is a brief excerpt, which seems appropriate on this occasion. We join the scene where a group of computer geeks are debating how to break into a computer lab. One of them recalls an incident when a burglar tried to break into his grandmother's house and she smashed his hand with a ball-peen hammer.

Their fun was cut short by a commanding voice. 'A sixteen-ounce ball-peen hammer isn't much good against a firearm. If I were a woman living alone I'd carry a point thirty-eight revolver, minimum. Double action. Effective enough for most purposes.

The startling newcomer had their surprised attention. He had stopped quite close to them and was surveying the door, and they instinctively stepped out of his way. He was tall, thin and pale, with thin brown Brylcreemed hair and dark red lips. The calculator on his hip was the finest personal computing machine, and on the other hip, from a loop of leather, hung a fencing foil, balanced so that its red plastic tip hung an inch above the floor. It was Fred Fine.

'You're the guy who runs the Wargames Club, aren't you,' asked the blond student.

'I am Games Marshall, if that's the intent of your question. Administrative and financial authority are distributed among the leadership cadre according to the Constitution.'

'The Wargames Club?' asked Gary, his voice suffused with hope. 'What, is there one?'

'The correct title is the Megaversity Association for Reenactments and Simulations, or MARS,' snapped Fred Fine. Still almost breathless, Gary said, 'Say. Do you guys ever play "Tactical Nuclear War in Greenland"?'

Fred Fine stared just over Gary's head, screwing up his face tremendously and humming. 'Is that the earlier version of "Martians in Godthaab"', he finally asked, though his tone indicated he already knew the answer.

Gary was hopelessly taken aback, and looked around a bit before allowing his gaze to rest on Fred Fine's calculator. 'Oh, yeah, I guess. I guess "Martians in Godthaab" must be new.'

'No,' said Fred Fine clearly, 'it came out six months ago.' To soften the humiliation he chucked Gary on the shoulder. 'But to answer your question. Some of our plebes--our novice wargamers--do enjoy that game. It's interesting in its own way, I suppose, though I've only played it a dozen times. Of course, it's a Simuconflict product, and their games have left a lot to be desired since they lost their Pentagon connections. but there's nothing really wrong with it.'

The trio stared at him. How could he know so much?

'Uh, do you guys,' ventured the blue one, 'ever get into role-playing games? Like Dungeons and Dragons?'

'Those of us high in the experiential hierarchy find conventional D and D stultifying and repetitive. We prefer to stage live-action role-playing scenarios. But that's not for just anyone.'

Well, you know, you had to be there.

'The secret we should never let the gamemasters know', Gygax is quoted as saying, 'is that they don't need any rules.' As I recall, our own adherence to the rules was...creative at best. And that was perhaps not a bad lesson to learn.

Thanks, Gary, for all the great experiences.

And experience points.
Posted by JCWood at 8:59 pm