A post at butterfliesandwheels.com made me think of a brief rumpus that I had a few months ago with a bunch of post-structuralists. What would be the collective noun, I wonder – the equivalent of a “murder of crows“: a “puddle“? A “pompous“? A “perturbation“?

Whatever we want to call them, they can be unpleasant. (An “unpleasant” of post-structuralists?)

At a conference (about the concept of “veiling”, both in its literal and metaphorical senses), I found myself under relentless attack for my humble suggestion that any debate about this or related issues is meaningless if we don’t link cultural phenomena (or “discourses”) back to some material reality. More specifically, I suggested that we need to confront the question to what extent our bodies shape our senses of self long before culture kicks in.

No, I said somewhat irately during the discussion, thinking of all the wounds that we get to see on a daily basis in the media and the reality that they quite clearly denote: if you tear open a wound there’s likely to be metres of intestine, pulsing and bleeding flesh and flabby fat underneath it. The body is not a text. It’s bloody, smelly and alive – and it hurts if you do that kind of thing to it.

Perhaps I was naïve in thinking that I could get away unscathed – not wounded, that is – in using the dreaded and indeed heretical b-word (biology) to support my point. Almost immediately I was set upon by a waif-like art historian in apparent anorectic denial of her body, who exclaimed:

“Show me the biological body!”

(The line comes across better in the original German, which combines the stilted politeness of the formal “you” with the exasperated condescendence of the unacknowledged avant-garde while introducing an undeniable (albeit probably unwanted) innuendo: “Dann zeigen Sie mir doch den biologischen Körper!”)

My healthy instincts of status-preservation prevented me from accepting her invitation in a literal sense. Though I must say I was tempted. 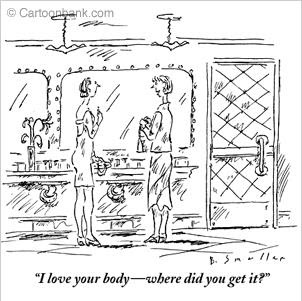 This exchange was followed by a kindly (or rather: friendly-aggressive) interception by another member of the auditorium, who patiently explained a “theoretical” position to me that I’d been aware of for at least fifteen years and in which, for a very brief period of my life, I also passionately adhered to:

“What we mean is that the body can only be accessed through the cultural codes that simultaneously describe and determine it.”

Or something along those lines, which I must have read umpteen times, in variations, over many years and might in fact have written myself at one point in my life – but whose heuristic significance veers towards zero.

Hearing these kind of statements only affirms my sneaking suspicion, shared by a number of sane colleagues, that the intellectual format of the humanities at present is deeply parochial and its presumably open-minded representatives intolerant at heart.

I mean: if all we can do is identify the famous codes that determine us down to our toenails, what’s the point of our work? Why waste our time at conferences slinging high-falutin’ jargon at each other to assert our status as alpha-theorists, when all this is just a discursive entanglement?

And, if that is the case, why was my discourse at this conference such an intolerable provocation?

But even more fundamentally: who makes those darn codes? Do they just hover around us like a nasty miasmic mist? Is there some gigantic computer programming them? Who programmes the computer? Who watches the Watchmen?

Or might it be some intelligent designer, after all?

Still, I must say that, apart from being intellectually offended by such statements, I’m also personally hurt by being treated like a benighted moron requiring initiation into allegedly arcane realms of high theory that I’m entirely familiar with – especially if the people who feel they need to initiate me are intellectual fashionistas wearing the rags from three seasons ago.

You can call them a “reflux” of post-structuralists.

And they suffer from what i would call Hyper-Reductionistic Reflux Disease – defned as follows:

the continual regurgitation and re-ingestion of one’s own arguments, which leads to the mistaken belief that theories about reality are more important, relevant, and life-sustaining than reality itself.

Makes me think of a grad school literature class I once took. When I quoted Nigerian writer Chinua Achebe on the topic of universalism, this loudmouth teacher’s pet said:

“Universalism is so passe. You might not know, but it hasn’t been used as an analytical paradigm for years. If you brought that up at a literature conference you’d be laughed out of the room.”

I felt compelled to remind the friendly feminist that feminism itself is based on universalist notions of social equality. Likewise democracy. Likewise, in fact, just about every Western political and cultural reference point you can think of.

Ahhh... academe... the hot air of it whims had blown her well beyond the shores of reason, never mind thinking about the real world as it is.

Those people were living in the bubble of their own theories, thinking them more important than the real world that “non-post-structuralists” live in day-to-day. They think they understand reality and the rest of us don’t. You had the bad manners to remind them that theory is not reality. Of course they got mad.

mluznyc: Thanks for your creative responses. I like 'reflux'.

Or a 'regurgitation' works too.

Here's to life outside the bubble.

Your comment from the 'teacher's pet' reminds me of the first part of Todd Solondz's _Storytelling_, in which a student -- who, it turns out had 'relations' with the writing instructor -- belches a series of inane (but theoretically impressive) non-sequiturs during a rather tense seminar.

Thanks and keep popping by!

They wouldn't last one minute in the jungle where I live. "Post-structuralist" means "Crocodile food" in the Congo.

I had the option of an academic career many years ago. I didn't take that road - & when I read this kind of thing it makes me glad I didn't. I would have been grinding my teeth while my blood boiled and my heart sank. That cultural construct known as "the body" would have been reacting unhappily to that kind of thing.

Thanks for your comments. Good to hear that I'm not alone in this world gone gaga(though it's a wee bit disturbing that I usually find this kind of support outside of my professional environs).

I must admit, though, that my sporadic anti post-structuralism rant has something of an exorcism about it. There was a time in my life when I would have subscribed to the kind of statements that I ridicule today and much of what I have to say these days comes as an apologia pro vita mea.

Although, come to think of it, my liberation from these ideas began already quite a while ago. My initiation came in the mid 1990s with an essay that I wrote on Jeanette Winterson's failed gender utopia in the novel _Written on the Body_ -- in which the author does everything NOT to address the reality of the body. This, I thought then, was odd indeed ....

Another illuminating moment was when a colleague insisted that the ferocious whipping that leaves the protagonist of Toni Morrison's _Beloved_ scarred for life amounted to nothing more than "the body being turned into text."

I find it truly disturbing that the academic world should provide an institutional framework, financed by public money (at least here in Germany), within which such inhumane inanities can be pursued.

One of the humanities' failures in the past decades has been to prohibit any form of commonsensical calling-a-spade-a-spadeism by depicting those who do adhere to this principle as intellectual troglodytes.

Keep being real, especially at this time of year.

"...a brief rumpus that I had a few months ago with a bunch of post-structuralists."