We're still riding the nostalgia train today, and this may be tiresome for many of you, so we'll make a brief pause for those who wish to disembark...

As a result of looking at a couple of Replacements-related links yesterday I ran across 'It ain't over 'till the fat roadie plays', a live recording of the band's final concert on 4 July 1991 in Chicago's Grant Park. The concert was part of a day-long series of shows at the 'Taste of Chicago' food festival and broadcast on WXRT which, at least for much of the 80s and early 90s was an oasis of good music in a largely arid radio landscape. (I haven't lived in the Chicago area since 1992, so I can't testify to their quality since then...)

The recording is available for download from Infonistacrat (via here) and--since I had some difficulty with the first track there--here. (Though the latter includes a final song that does not seem to actually be the Replacements: the original concert, in any case, ended with 'Hootenany')

I'm happy to have found it for a number of reasons. I'm continually struck by how significant music was (and still is) in shaping my memories, and the Replacements were one of those groups whose albums became more than just something to listen to and somehow became something important.

A more direct reason is that I was at that show.

I had discovered the Replacements in 1986, when I had a show on my high school's radio station (88.3 FM, quite literally 'left of the dial'). Someone had made a cart of 'Kiss Me on the Bus' and put it amongst the other random things people left there. (I discovered a lot of music that way.) I played it once and was hooked, and I think I played it during every subsequent show. 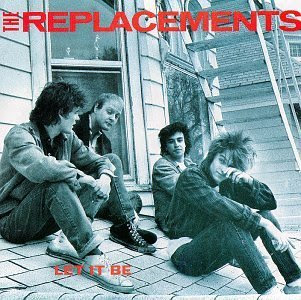 The first album of theirs that I bought, I think, was Pleased to Meet Me (1987) which I still think is their best (although you can start a rather long argument with other fans about which is best and whether the early punk years were better than the more melodious direction they later took, etc. That's all very tiresome. It's all good. In terms of best album cover, though, I think it's the one for 'Let It Be', pictured. It sums up an era, musically and stylistically.)

Over the following years, there was a point at which I had everything they had put out (including the infamous live bootleg "The Shit Hits the Fans") in one form or another (mainly on cassettes, which disappeared in one of my many moving-house experiences. It's amazing when I think back to how important a technology cassettes were to us...I had hundreds of albums taped from people and spent an inordinate amount of time putting together compilations for friends of mine.)

The 'Mats combined energy with melody and a strong current of desperation (and, at least on the earlier albums, a lot of humour) in a way that few bands did, and for me personally they marked an early transition between my obsession with 60s music and taking more interest in what was going on in the world of what was then called 'college rock', well before the term 'alternative' had been invented. 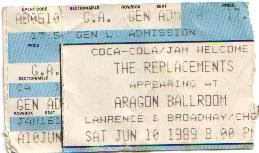 Two years before the Grant Park gig, I saw them at the Aragon Ballroom (aka, "Aragon Brawlroom") in 1989, in an environment that was much more appropriate: dark, dingy, crowded and loud. It remains one of the best concert experiences I can remember, though it's a somewhat sad one since I saw them with a good friend of mine at the time who soon after seems to have disappeared from the face of the Earth.

Anyway, I don't remember all the details of the July 4th 1991 concert, other than it was sunny and hot, and we were very excited to be there. (It was a good summer for concerts: nearly two weeks earlier, on my 21st birthday, I had inadvertently seen Smashing Pumpkins at the Cabaret Metro: 'inadvertently' since we'd never heard of them but went in order to see the opening band, Big Hat.)

As I recall, I was in Grant Park that day with at least one other member of the band I was in at the time.

The Replacements were one of the groups we covered (we did a passable version of 'Left of the Dial') and they were on heavy rotation in the group house we shared for a year. Few other groups have the ability to instantly transport me back to those days.

Paul Westerberg, in a 1996 interview, was asked about the Grant Park concert:

A: "Tommy and I knew it was the last performance of the group. We wanted it to be absolute magic and it wasn't. It was a little tired and it was kinda sad. [...] It's tough when you know something's done. We purposely didn't make a big announcement to everyone. The beauty of that Replacements show is we ended up playing 'Hootenanny' and gave the instruments to our roadies one at a time. We left the way we started: anonymous.''

Q: Have you considered releasing it, since it was broadcast live on WXRT? Was that the reason you broadcast it - since you knew it was the last show?

A: "No, WXRT, they run the thing. They do that. Actually, it was filmed too. I have no idea who's got that footage. Somebody has that footage somewhere.''

(Yes. And where is that footage? The handing over of the instruments to the roadies during the last song, by the way, is the reason for the unofficial name of the recording.)

Despite Westerberg's modesty, I think it was a great show, as demonstrated by the recording. But it does seem obvious that he was frustrated at the time. There's a moment (right before they play 'Someone Take the Wheel') when he says 'Now you can see why we're hangin' it up' which should have made it plain to anyone that this was the end.

But I don't recall now when we found out that they had actually broken up. There was no Web in those days. I suppose it was probably via MTV or maybe in the next couple of days via XRT.

I've found a transcript of the commentary between the DJs after the show, which, as Jefito notes, makes sort of a fitting epitaph for the group:

DJ One: I believe the Replacements have left the stage and what a wild conclusion it was! But is it the conclusion?
DJ Two: Well, we sure don’t know, only the Replacements know for sure.
DJ One: The crowd is still hungry out there.
DJ Two: They are nowhere to be found. They’re not on the side stage area either. I think they’re gone.
DJ One: I think that’s it. They’re so unpredictable, though. Are they gonna come back?
DJ Two: Or they’re gonna break up? Maybe they’ll break up and then they’ll get back together and then they’ll come back.
DJ One: I believe they’re not going to be back.