Is there life on Mars?

In the midst of an article at the Washington Post on optimistic and pessimistic versions of science fiction (the article's OK, though a bit breezy, and it rushes a bit lightly over the complexities of, say, Brave New World or the work of Robert A. Heinlein) we run across a reference to Edgar Rice Burroughs's famous character John Carter.

Partly because of the name, I suppose, I was aware of John Carter from a relatively early age (though at first through the Marvel comics adaptation rather than the books), so I know he has been represented as looking something like this: 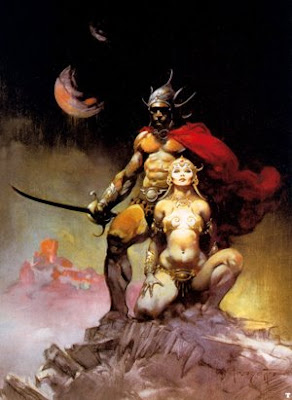 (Yes, the Frazetta girls who appeared on the covers of those books were always one of the appealing things about the series.)

However, the hyperlink in the Washington Post article that appears at the first mention of "John Carter" leads to something quite different (click image for a larger view): 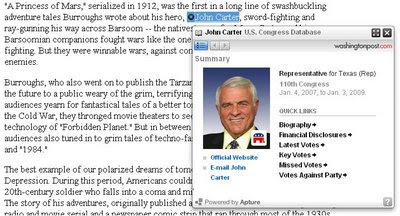 Our Martian warrior (referred to here as 'sword-fighting and ray-gunning his way across Barsoom') seems to have returned from the red planet, shed the swords and abandoned the scantily clad chicks to become a Republican congressman in Texas.

I would never have guessed.

Though I'm sure the Marvel version of this will be better than it sounds.
Posted by Unknown at 8:15 pm

Seriousy, you don't see the resemblance? Differences in lighting and costume do make a noticeable difference, I'll agree.

As for the woman, that is obviously Sarah Palin surveying the scene for incursions by Russians or news crews with microphones.