Filled with husbandly pride (and, knowing how much work went into it, no small amount of awe and respect), I am very pleased to announce that The Theatre of Civilized Excess: New Perspectives on Jacobean Tragedy is now available to order. 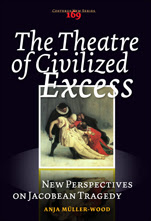 Jacobean tragedy is typically seen as translating a general dissatisfaction with the first Stuart monarch and his court into acts of calculated recklessness and cynical brutality. Drawing on theoretical influences from social history, psychoanalysis and the study of discourses, this innovative book proposes an alternative perspective: Jacobean tragedy should be seen in the light of the institutional and social concerns of the early modern stage and the ambiguities which they engendered. Although the stage’s professionalization opened up hitherto unknown possibilities of economic success and social advancement for its middle-class practitioners, the imaginative, linguistic and material conditions of their work undermined the very ambitions they generated and furthered. The close reading of play texts and other, non-dramatic sources suggests that playwrights knew that they were dealing with hazardous materials prone to turn against them: whether the language they used or the audiences for whom they wrote and upon whose money and benevolence their success depended. The notorious features of the tragedies under discussion – their bloody murders, intricately planned revenges and psychologically refined terror – testify not only to the anxiety resulting from this multifaceted professional uncertainty but also to theatre practitioners’ attempts to civilize the excesses they were staging.

Available now from Rodopi.
Posted by Unknown at 10:41 am

Email ThisBlogThis!Share to TwitterShare to FacebookShare to Pinterest
Labels: academia, self-promotion, The Wife