Touching back down to Earth again, ever so briefly

Your humble narrator and his beloved companion have been on the wing more than usual over the last couple of weeks, hence the shortage of commentary.

Unlike the common swift -- which manages everything necessary to its lifestyle without coming to rest -- I tend to find I need some familiar earth beneath my feet (not to mention a certain amount of solitude and my own desk) in order to really get anything done. In this it seems I am also unlike those hundreds of people I recently saw in airports crouching by power outlets in any free moment to write e-mail, manipulate databases and do things with spreadsheets that I don't even want to have explained to me. (Or, who knows, maybe they were just using airport wi-fi to visit Second Life.)

Nonetheless, I've found, some time away from the endless electronic world is actually not that bad a thing, at least once the first few days of withdrawal symptoms subside.

We're taking flight again tomorrow, though more briefly, to attend a conference on violence history in which I'm participating.

So, things will remain quiet here until some time next week, and, today, I really need to put the finishing touches on my paper and presentation.

However, I did want to quickly mention two things, while I have your attention:

First, a good friend of mine, Toronto-based artist Keith W. Bentley, has entered one of his artworks, Cauda Equina, in the 'Saatchi Gallery Showdown'. 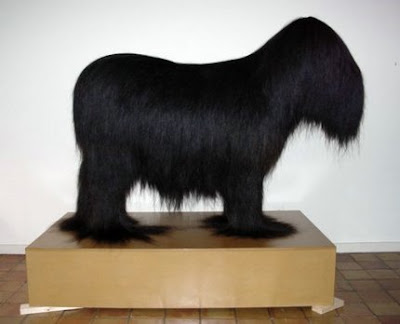 As Keith describes it:

The hair of Cauda Equina comes from horse rendering plants and over the span of eight years, each hair was hand knotted into fabric. The end result being a near life size horse wearing the funeral veil of more than 250 slaughtered horses.

A lot of Keith's work deals with nature and death, and Cauda Equina can be seen here, where you may vote on it. I would recommend giving it a ten: when we were neighbours, I saw various stages of this work being produced and I know how much work went into it. The hair here was woven by hand and was incredibly time consuming. (Which is why completing the piece took eight years.) I think the end result works, both aesthetically and, once you know what's behind it, conceptually.

Second, I see that I have been 'tagged' by You Are Here as a 'Thinking Blogger', which is very nice indeed, and I didn't want to delay expressing my gratitude on that regard. Thanks!

This means, though, that it's my turn to nominate five blogs that make me think, and keep the whole thing going.

To be continued, when we again touch down.
Posted by JCWood at 9:16 am